Continue to Deadline SKIP AD
You will be redirected back to your article in seconds
Skip to main content
June 24, 2019 7:38am 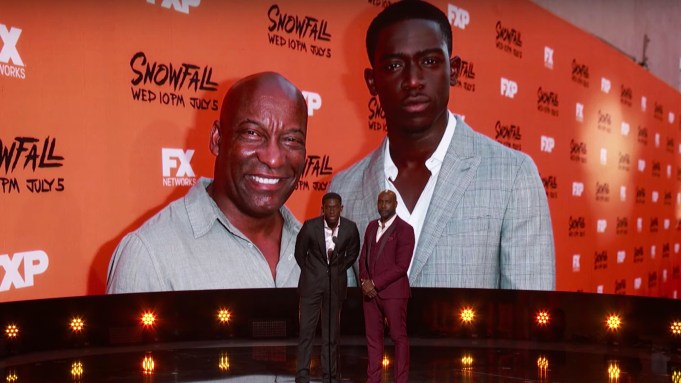 Morris Chestnut and Damson Idris, two actors representing either end of the too-brief career of late director John Singleton, presented a heartfelt BET Awards tribute last night to the man they called not only their director, but a sensei, a big brother, a mentor, friend and visionary.

Watch the tribute above.

Chestnut recounts his first meeting with Singleton, just a couple years before the two would make Hollywood history with 1991’s Boyz n the Hood. “It’s 1989, Los Angeles, California,” said Chestnut, who plays Ricky Baker in the film. “I meet a 24-year-old director just out of film school. He cast me in my first movie, which was his first film as well, and that film was Boyz n the Hood. I just remember being so nervous and John was just so brilliant, taking his time and guiding me and mentoring me…John brilliantly brought to life the stories of black youth at a pivotal time in America.”

After Chestnut, Idris recalled his impressions on meeting Singleton. “Simply put, to me John was a legend in this business,” said Idris, who plays Franklin Saint in Singleton’s FX crime drama Snowfall. “From then on he became not only my sensei, but my big brother. He hadn’t changed much from the man Morris met, still a…visionary, still determined to tell our stories his way.”

Singleton, whose other credits included, among others, Higher Learning, Hustle & Flow, and episodes of Billions, Empire and American Crime Story, suffered a stroke April 17 and was removed from life support at Cedars-Sinai Hospital on April 28. He was 51.