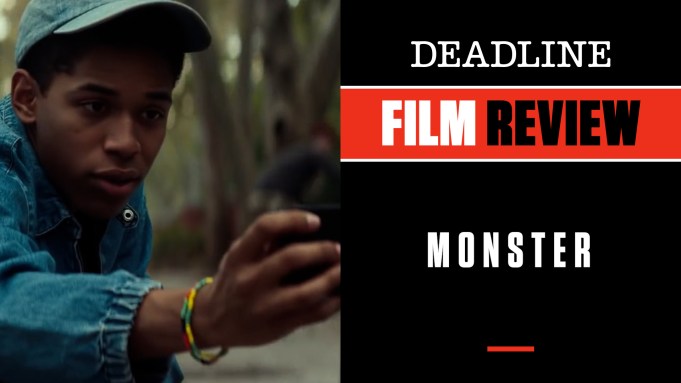 In case you are wondering, this is not some sort of retro review of 2003’s Monster, the film about a serial killer that won Charlize Theron an Oscar. Apparently, producers are free to use whatever title they want, even if it has been used before, and thus we now have the 2021 Monster.

Maybe I should clarify that because this film, the story of a 17-year-old African American honors student who finds himself on trial as an accessory to murder, actually premiered at the Sundance Film Festival in January 2018, and Netflix finally announced it had acquired Monster in November — nearly three years later. Now at last the world can see it when it debuts Friday on the streamer. Uneven at times, it nevertheless is a powerful and sometimes moving drama that shows the American justice system through the eyes of a young Black man caught up in it as prosecution bait because he was in the wrong place at the wrong time.

The feature film debut of celebrated commercials and music video director Anthony Mandler, who has worked extensively with the likes of Rhianna and Beyoncé, among many others, it is hard to say why it has taken so long for this film to be released. But the timing is excellent now, and the reception might be even better than had it come out right away on the heels of its Sundance debut, which was clouded by the existence in the fest that year of another similarly named and racially themed movie, Monsters and Men, which not only took a Jury prize but also featured two of the same stars as Mandler’s film in Kelvin Harrison Jr. and John David Washington. Add to that Harrison Jr.’s 2019 box office disappointment Waves, which also dealt with a promising young Black man caught up in a crime, and perhaps distributors were skittish, not to mention a lingering middling critical response to it from its Sundance debut. Seeing the film now, with its intentions and its execution, there should be no good reason to explain why it drew the short straw.

Harrison, an exceptional young actor, plays Steve Harmon, a budding filmmaking student at an upscale school — a kid full of promise and with a family that supports him wholeheartedly (no less than Jennifer Hudson and Jeffrey Wright play his parents). The inquisitive mind of a young director leads him to the wrong people, particularly bad-news William King (Rakim Mayers aka rapper A$AP Rocky) and Bobo Evans (Washington), who basically use him as a pawn in a botched attempted robbery of a local Harlem convenience store that turns into violence and a murder of an employee.

As versions of events unfold, and through Harmon’s own lens, we see how the kid is swept into trouble, largely by the color of his skin. It is all too familiar and sad a tale of American life and seems even more pertinent since the film was shot just a few years ago. How is the that term “monster” defined, and who or what is it aimed at? We see, almost in Rashomon style (and in case we don’t get the connection, that Japanese classic film is shown in Harmon’s class), Harmon’s story unfold through different encounters including a streetwise cellmate named Sunset (an excellent Nasir “Nas” Jones), his good-hearted film studies teacher (Tim Blake Nelson), his savvy and compassionate defense lawyer (a superb Jennifer Ehle), her determined courtroom rival and prosecutor (Paul Ben-Victor) — who throws the term “monster” around freely — and others as Mandler and his screenwriters Radha Blank (The 40 Year Old Version breakout), Cole Wiley and Janece Shaffer (adapting Walter Dean Myers’ 1999 YA novel) attempt to sort it out. It all builds suspense toward the conclusion as the film largely becomes a courtroom drama in its final act and all the pieces come together.

Harrison and this fine cast hit no false notes along the way, and Mandler’s almost-poetic style works better than you might expect. This Monster has much to say and does it very effectively. Producers are Aaron L. Gilbert, Mike Jackson, Tonya Lewis Lee, Edward Tyler Nahem, and Nikki Silver. Check out my video review with scenes from the movie at the link above.

Do you plan to see Monster? Let us know what you think.