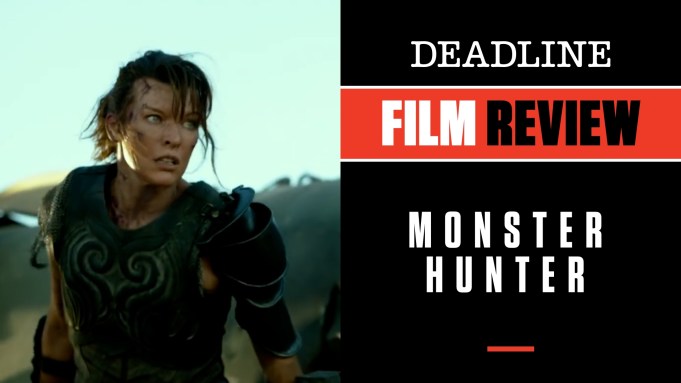 Right off the bat I will confess I know nothing about video games, and really have no idea of the difference between Monster Hunter and, say, Hunter Biden. So going into watching the movie adaptation of the Monster Hunter video game I was — and am — prepared to approach it the way I like to review any new film: free of any expectations, good or bad.

So here’s the good. The special effects and CGI monsters on view here are top of the line, at least once you get to the 18-minute point where they, particularly one called Diablo, start chomping on a brunch menu of Army Rangers. The very opening involving a ship being attacked is so 1950s-cheesy looking in terms of effects I have to think it is wink-wink on purpose because the rest of the movie is pretty nifty visually — an impressive feat considering this film has a much lower budget than many higher-dollar monster flicks like Warner Bros’ recent dances with Godzilla. In some ways this film, and its relentless obsession with action sequences involving these unfriendly beasts in different iterations, reminded me most of Paul Verhoeven’s Starship Troopers, which came from a more prestigious label at Sony rather than from the studio’s discount B-movie brand at Screen Gems which is releasing Monster Hunter.

Clearly designed for a non-discriminating international audience, this high-octane actioner pours on the fights and battles, whether they are internecine martial arts encounters between the main human stars Milla Jovovich and Tony Jaa in what is labeled “Our World” or between them banding together versus the “New World,” gross-looking creatures that emerge from their own desert hideaways. Director Paul W.S. Anderson’s approach is never let up on the action for more than a brief respite and apparently don’t worry about sacrificing any semblance of character development getting in the way. That’s the bad. Maybe even a little backstory of Jovovich’s kickass U.S. Army Ranger Captain Artemis might have been in order, but noooooo. She is all bloody business right from the moment she leads her properly diverse unit of soldiers into the dunes of the Afghan desert to investigate the disappearance of another group of Rangers.

It doesn’t take long for the gooey likes of Diablo to rear his (very) ugly heads and declare: Game on. This all means an ignoble quick exit for many of our supporting players (among them Meagan Good and Tip T.I. Harris) but not Artemis, who manages to survive the initial assault, only later to encounter the mysterious arrow-launching stranger known only as “Hunter” played by international sensation Jaa, an actor who clearly knows why he was hired. They make a fun pair to watch, as they have to confront all sorts of threats from this oasis of big and small opponents running rampant over this part of the world. Later on they are thrown into more peril and a different cast of monsters when Ron Perlman’s Admiral turns up along with a giant cat and other accoutrements to join them in further ramped-up action sequences.

Whatever dialogue these characters spout is meaningless. You could watch this with the sound turned off and not miss a thing, even though the sound design itself is so loud and relentless it goes with the landscape. Anderson takes nothing for granted that anyone in the audience might doze off during this thing.

Taken on its own terms, Monster Hunter, safely rated PG-13, is B-movie fun. You were expecting anything else from the man who gave us AVP: Alien Vs Predator, Event Horizon and six, count ’em six Resident Evil installments (four of which he also directed) all starring his wife, who happens to be Jovovich, the once and future queen of this nonsense? Give her props, real props, for pulling off the physical aspects it takes to just get through shooting something as taxing as this. Jaa is an inspired and amusing co-star, a new-age Jackie Chan. And fear not, the team that gave you all those Resident Evils appears fully prepared to do the same for future Monster Hunters, even though this one has run afoul of Chinese censors after that country’s opening drew fan complaints and was quickly cut short because of one offending joke (since removed, we are told, although the China run remains in limbo).

Check out my video review above with scenes from the movie. Do you plan to see Monster Hunter? Let us know what you think.