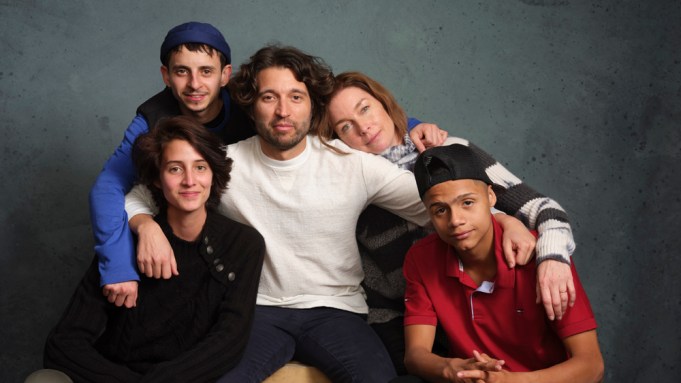 Alejandro Landes’s Sundance film Monos follows a band of rebel child soldiers with war names like Rambo (Sofia Buenaventura), Bigfoot (Moises Arias), and Smurf (Deiby Rueda) who kidnap an American engineer, Doctora (Julianne Nicholson) — something that the cast struggled with because they got along with each other so well. The director and cast talked about their experiences when they visited the Deadline Studio at Sundance.

“The hardest part was communicating before shooting difficult scenes and having to turn into this monster,” says Arias when talking about holding Nicholson hostage. “It was a test of Alejandro pushing us to not hold back. I feel it was uncomfortable at times but it had to be done essentially.”

On the flipside, Nicholson talks about being the one held captive. “This was an uncomfortable shoot from start to finish but ultimately in the best way if that makes sense,” she said. Nicholson adds that she got along with them great off camera, but when it came to shooting, it was a different story — but she says she is “endlessly grateful for this experience.”

“I haven’t seen these guys in two and half years and not a day has passed,” she says. “The love is there…I almost burst into tears when I saw them.”

Landes says that the film echoes Lord of the Flies and what is going on in the world right now when it comes to war and peace. On a deeper level, he says “The conflict of adolescence and the actual conflict of war mirror each other” which is very evident in the film.