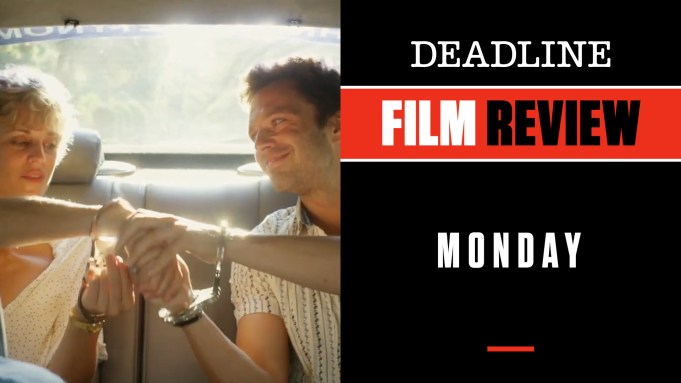 Originally seen as part of this year’s virtual Toronto Film Festival, director/co-writer Argyris Papadimitropoulos’ Monday was actually made quite a while ago in a time where human beings could sweat, dance, touch and feel complete abandon with each other, whether in Europe or America or anywhere else. Looking now at this steamy romance, focusing on a relationship between two passionate young adults who spend their first night after meeting at an Athens club naked on the beach entwined in each other until the cops break them up, it all comes off like a welcome vacation from the realities we now live in, as well as a tempting travelogue for Greece where it was shot. There isn’t really a whole lot of plot because this is more about sensual pleasures, opposites attracting, ex-pats falling in love on foreign soil and carrying on like they are the only two people circling in their universe, even if both really know it can’t last.

In the script from Papadimitropoulos and Rob Hayes, Stan plays Mickey, a DJ with further musical ambitions who has been living in Greece for seven years when he meets Chloe (Denise Gough), a lawyer about to head back to her life as it was in America. Sparks fly, however, and their mutual attraction is so imminent it leads to that aforementioned tryst on the sand, the first of many raw, naked scenes between them. The film proceeds to chronicle their budding relationship, their ups and downs, through the course of several weekends.

The title Monday serves as a call to reality for this pair, especially free-wheelin’ Mickey, who hangs with his friends like he is still in college rather than the father of a child from a past relationship he doesn’t get to see much. This is a guy in his 30s running from responsibility and hoping the party never really ends, spinning tunes and paying the bills with a dull day job as an advertising jingle writer. Chloe knows better but seems, at least temporarily, unleashed by this new chapter, an unexpected bounce-back from a doomed and abusive relationship, even when this new one eventually leads to a weekend in jail followed by the realization that Mickey is no white knight out to rescue her, but rather a guy consumed with his own life, such as it is.

This is a combustible pairing to be sure, and if the film works at all (some of it is quite watchable) it is because its two leads know exactly what they are doing, and seem to have no inhibitions in playing characters with no inhibitions at this exact moment (shedding their clothes for a completely nude late-night motorcycle ride through the middle of the city proves that without a doubt). Stan is currently enjoying high visibility in the Disney+ series The Falcon and the Winter Soldier, which continues his membership in the Marvel Cinematic Universe, but as he has shown in movies from I, Tonya to the underrated Destroyer to The Devil All the Time (as well as another sexually charged role in Endings, Beginnings) he can be arresting in a number of different roles. The Irish Gough (Juliet, Naked) is a decent match for those talents, and the pair exhibit real screen chemistry — a fortunate circumstance because this movie depends completely on that or it sinks, especially since they already have had sex before knowing each other’s names.

At two hours the film feels long, the premise dragging on a bit past its welcome, but still, as Mickey and Chloe have their pleasures, so too does the movie about them, a cinematic fling with a few moments to remember.

Producers are Deanna Barillari, Damian Jones and Brian Kavanaugh-Jones. IFC Films releases in theatres and digital platforms Friday. Check out my video review above with scenes from the movie. Do you plan to see Monday? Let us know what you think.