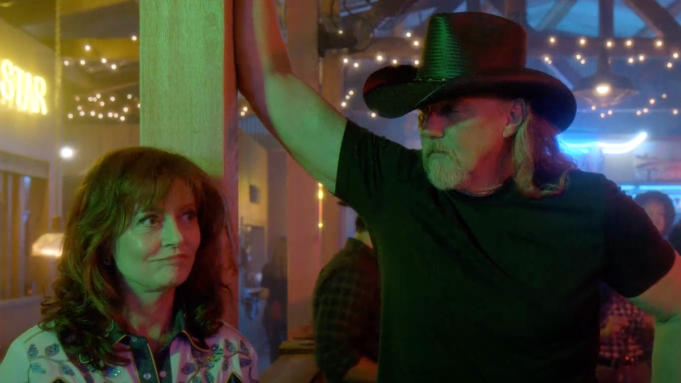 Susan Sarandon will let nothing get in the way of the Roman country music empire in the first look at Fox’s upcoming musical drama Monarch.

During Game 2 of the 2021 World Series, Fox unveiled first footage of the drama series, which also stars Trace Adkins, Anna Friel and Beth Ditto as members of the Roman family –a.k.a. “the first family of country music.”

“This is our chance to show the world that the Roman family legacy will continue beyond me,” Sarandon’s Dottie Cantrell Roman kicks off the clip.

Created by Melissa London Hilfers, Monarch is described as a Texas-sized, multigenerational musical drama about America’s first family of country music, the Romans. The Romans are headed by the insanely talented, but tough as nails Queen of Country Music Dottie Cantrell Roman (Sarandon). Along with her beloved husband Albie (Adkins), Dottie has created a country music dynasty. But even though the Roman name is synonymous with authenticity, the very foundation of their success is a lie. And when their reign as country royalty is put in jeopardy, heir to the crown Nicolette “Nicky” Roman (Friel) will stop at nothing to protect her family’s legacy, while ensuring her own quest for stardom.

The first look at the drama teases tensions between family members and lovers as the Roman family looks to expand its legacy for generations to come.