Continue to Deadline SKIP AD
You will be redirected back to your article in seconds
Skip to main content
July 23, 2018 12:29pm 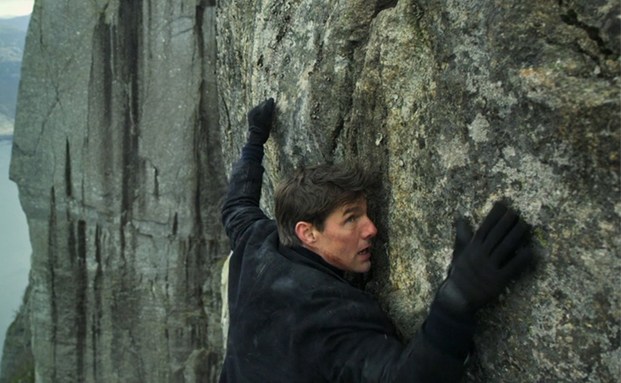 He broke his ankle making Mission: Impossible – Fallout, but it was all worth it. Tom Cruise’s sixth go-round as IMF leader Ethan Hunt is an unqualified corker of a summer action film, the best in the series that has been going since 1996.

As I say in my video review above, the M:I franchise just keeps topping itself, which I didn’t think was a mission possible after the double whammy of the two previous films, 2011’s Ghost Protocol, and especially 2015’s Rogue Nation, but in bringing back writer-director Christopher McQuarrie from the latter film (the first time a director has repeated duties for the series), be assured we are in good hands again. After making $2.8 billion worldwide for the first five films, it is no wonder Paramount and Skydance would want to keep a good thing going, even if its seemingly fearless star is getting close to 60. Of course, that hasn’t stopped the likes of Denzel Washington, Harrison Ford and Liam Neeson from going for all the action marbles, and Cruise is just 56, so on the basis of this one, let’s hope he accepts a couple more missions.

What makes the series so great is it relies less on CGI trickery (a la Skyscraper) and more on good old-fashioned stunt work, with a derring-do star who can effortlessly convince the audience it is really him doing these feats. Cruise famously broke an ankle while jumping from one rooftop to another in London (piece of cake, right?) and forced a production shutdown. But he still finished the stunt even in that level of pain, and the results are quite visible on screen without missing a beat. That bit was small potatoes compared to some of the set pieces here, including a thrilling skydiving sequence in which Ethan and rogue CIA agent August Walker (Henry Cavill) must pull off parachuting together 25,000 feet in the sky. There’s also an incredible (no hyperbole) helicopter duel between the pair that comes toward the end of the film that has to be seen to be believed.

Of course there are also the de rigueur chases on foot, motorcycle and BMW throughout Paris, just one of many picaresque exotic locations chosen this time that also include Queensland, London and rural mountainous regions of Norway. The title alone indicates that the stakes have to be ratcheted up each time. I am not sure how the 1960s TV series this all came from managed to top itself each week, but that often was with clever disguises donned by the regulars in ingenious sequences. Perhaps that is why I also loved the opening scenes of this film, which are a tip of the hat to what the old series did so well. It’s a heck of a lot to fun.

Plot-wise this edition revolves around finding three missing plutonium cores, which are the height of danger in this nuclear age. The main villain from Rogue Nation, Solomon Lane (Sean Harris), is now in custody and literally tied up, but he’s still up to no good and you can bet he will do what he can to make matters worse for the IMF in recovering these missing elements. He has never gotten over the fact that Ethan screwed up his life and evil plans and works to keep up the pressure, on land or under water. There also are big complications with Walker, the CIA agent foisted on Hunt by new take-no-prisoners CIA director Ericka Sloan (Angela Bassett) — a guy with a definitely dark view of the world, determined to execute his own agenda. It is a clever bit of casting to have an actor like Cavill to play him, a star mostly known for Superman. He can’t shake his stiff presence onscreen, but the pairing with Cruise actually works. The other new addition to the cast is Vanessa Kirby (The Crown), who plays a mysterious arms dealer named Alana aka the White Widow.

Fortunately the franchise regulars all are back including Ving Rhames as Luther (a staple since M:I began); Simon Pegg, more circumspect this time as Benjy; Alec Baldwin as former CIA director Alan Hunley, who now is secretary for IMF; and returning from No. 5 is the alluring assassin Ilsa (Rebecca Ferguson). A highlight also is the return of Hunt’s wife Julia, who was last seen in M:I-3. Again in the hands of Michelle Monaghan, there is a poignant reunion in store for the pair that brings closure to that time in Hunt’s life.

At nearly 2 1/2 hours, you get your money’s worth for this Mission — which not only is the best one yet, it is also the best summer film of the summer and a template for what a great action movie should be. Producers are Cruise, J.J. Abrams, McQuarrie, and Jake Myers. Paramount opens it this Friday.

Do you plan to see Mission: Impossible – Fallout? Let us know what you think.