Continue to Deadline SKIP AD
You will be redirected back to your article in seconds
Skip to main content
April 11, 2019 3:05pm 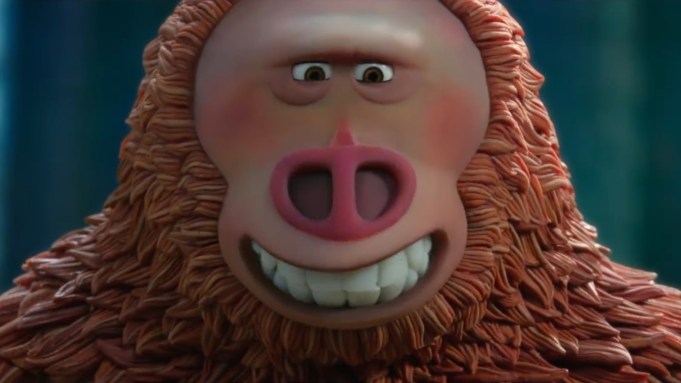 It’s always a day for celebration in the movie world when a new feature shows up from Laika, the Oregon-based producers that specialize in the nearly lost art of stop-motion animation. With an enviable Oscar-nominated track record that includes Coraline, ParaNorman, The Boxtrolls and Kubo and the Two Strings, Laika can be counted on for a winner every time. Its latest, Missing Link might not be its greatest, but it does pretty well on its own terms with an amusing story writer-director Chris Butler says is the result “if David Lean directed Around the World in 80 Days starring Laurel and Hardy.”

With that kind of statement referencing entertainment giants of decades ago, you know film fans are in good hands — if not general audiences, which seem to have no cinematic memory past the last Marvel film. They should find themselves enthralled anyway with this story of English adventurer Sir Lionel Frost (Hugh Jackman), who is determined to find respect from his snooty British club by taking off to discover the elusive and unseen Sasquatch (think Bigfoot). This setup reminded me of the 80 Days plot indeed, a near-impossible feat but one taken anyway.

Accompanying him is Adelina Fortnight (Zoe Saldana), who is key to all this because she has the connection to the map that will lead to their prey. And indeed it does, but the creature they come upon (Zach Galifianakis) is a lot more accessible than once believed, an a lively travel partner as well when he agrees to be “caught” and seen, in return for going to Shangri-La in the Himalayas, where he thinks he will be with his own long-lost relatives.

Once Link comes into the film, things liven up considerably, particularly with the affable voice work from Galifianakis. It probably is the most Disney-like character seen in a Laika project, which usually goes artier and darker. Thanks to Link, this could be its most commercial shot yet. Nevertheless it has visual style to burn and, beyond Galifianakis, an A-list voice cast led by the always reliable Jackman and Saldana. There’s also the great Emma Thompson as the Elder, the yeti leader they meet at the apex of their journey, and none too friendly. Stephen Fry and Timothy Olyphant are others who make this an animated charmer all the way. Butler, who helmed 2012’s ParaNorman, keeps it all light this time, with exquisite stop-motion images. Carter Burwell supplies the sparkling score.

If anything really is missing from Missing Link, it might be the extra layers of depth and artistry endemic to past Laika efforts, particularly the devilishly dark Coraline and the BAFTA-winning Kubo and the Two Strings, which might be the pinnacle for the company to date. Still, you are guaranteed an entertaining adventure with this one, and that is definitely a plus. Kids ought to like the film, particularly Mr. Link. Producers are company founder and Kubo director Travis Knight and Arianne Sutner. Annapurna brings it to you Friday. Check out my video review above, which includes scenes from the film.

Do you plan to see Missing Link? Let us know what you think.