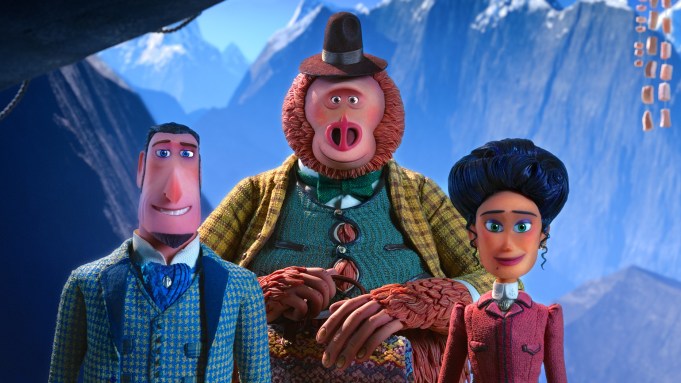 EXCLUSIVE: Laika’s Missing Link lives up to its name — the Oscar-nominated adventure was made with old-school stop animation but also represents an evolutionary leap forward in new-tech puppetry craft. That’s abundantly clear in a new featurette that premieres today exclusively here at Deadline in the video above.

The featurette spotlights the efforts of Benoit Dubuc, the CG facial animation supervisor for Missing Link. The movie (which features a voice cast led by Hugh Jackman, Zoe Saldana, and Zach Galifinakis) employed full-color resin 3D-printed replacement faces for every character in every shot of the film — an approach that frequently required five 3D printers running 24 hours a day and churning out about 2,000 faces per week. In total, 106,000 faces were made for the film, giving writer-director Chris Butler a robust range of emotive performance.

Dubuc said the nuance of the faces allowed for emotional storytelling to be written on the faces of characters.

“One of the first sequences we started on was the one in Link’s cave, where Link reveals his longing to find his cousins the Yetis,” Dubuc said.  “It’s one of the more important sequences in the film. In it we need to understand the sincerity of Link’s motive and the weight of his loneliness, but equally, we need to believe that Link’s circumstance has moved Lionel, who up until that point has acted exclusively in a narcissistic and self-centered way. This is the first chink in his armor. “

Nuance was necessary, too, to avoid exaggeration or heavy-handed moments that are among the traditional compromises with puppetry performances.

We wanted to make certain that we didn’t overplay the moment. In Lionel, this meant very subtle, soft reactions to Link’s revelatory monologue. We weren’t certain that our brand new printers would be able to handle the level of subtlety we were asking them to do…the results exceeded our expectations and we were thrilled.”

Missing Link has already won the Golden Globe for best animated feature and Wednesday night the globe-trotting tale added two Visual Effects Society awards to its trophy season haul. If it wins the Oscar it will be the first for Laika, the Oregon stop-animation specialist studio behind Coraline, Para-Norman and The Box Trolls.