Continue to Deadline SKIP AD
You will be redirected back to your article in seconds
Skip to main content
June 18, 2020 4:49pm 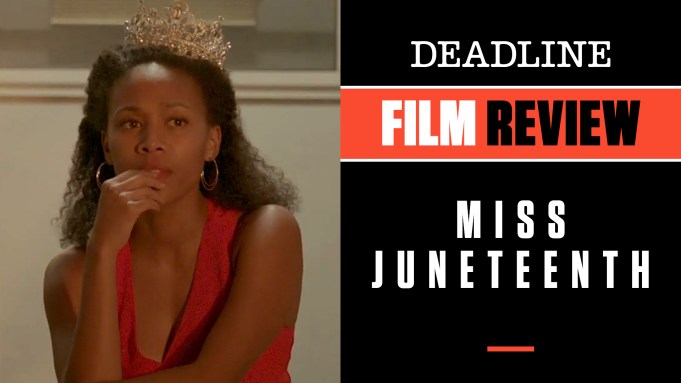 When debuting writer-director Channing Godfrey Peoples’ Miss Juneteenth premiered at January’s Sundance Film Festival, I can imagine she had no idea how significant the title and subject matter of her first movie would be by the time it was released on June 19, the holiday named in honor of the day in 1865 when slaves in Texas finally were freed more than two years after the Emancipation Proclamation. It was a cause for celebration, and so is this quietly effective drama. But now, with protests around the nation and the world reminding us daily that Black Lives Matter, this beautifully acted film has taken on a timeliness beyond the expectation of anyone involved. This is a very good thing, and it is a film that should be sought out when it debuts Friday on digital platforms and VOD.

Turquoise Jones (Nicole Beharie) had a crowning moment early in her life when at 14 in 2004 she was named Miss Juneteenth at the local pageant in her small Texas town. With that honor came a college scholarship, but life intervened: Turquoise got pregnant, and her dreams of a better life were dashed. Now she has a 15-year-old daughter, Kai (Alexis Chikaezc), a girl she wants to achieve all the things she couldn’t. She enters her in the Miss Juneteenth competition, hoping to channel her own lost hopes through her daughter and get Kai the life she never had. Only problem is that Kai is her own person, she has a boyfriend now and would much rather join the dance squad than parade in this pageant.

Meanwhile, Turquoise must deal with her deeply religious but alcoholic mother (Lori Hayes); Ronnie (Kendrick Sampson), who is Kai’s father and a sometimes presence that Turquoise can’t seem to quit but would like to; Bacon (Akron Watson), the good man who likes her and is her boss at the funeral home where she tends to making up dead people for their burial; and Betty Ray (Liz Mikel), who owns the BBQ restaurant that serves as Turquoise’s second job as she just tries to pay her bills and make ends meet in this economically undernourished Texas town.

It is a relatively simple story, unassuming but truthful and recognizable. The actors fit the bill perfectly, but it is first and foremost a real showcase for the deep talents of Beharie (Shame, 42), who beautifully and with great understatement inhabits this role and makes us root for the happiness of a woman who peaked at Miss Juneteenth but never got to reap the benefits. She wants the best for Kai but perhaps doesn’t realize that the best would be to let her daughter follow her own path and not try to relive her mother’s. Sampson is excellent as something of a disappointing dad; he might want to marry Turquoise, but their time has come and gone. Watson has a smaller role, as does Hayes, but they acquit themselves nicely. Chikaezc expertly realizes a teenager who has her own dreams and an idea of how to pursue them.

Hopefully the film’s title, with all the inherent publicity that Juneteenth is getting, draws people to seek this out. Those who do will be grateful to find a lovely indie effort that makes the emergence of a promising new African-American female director, and a breakout performance of a star-in-the-making with Beharie. Check out my video review with scenes from the film at the link above.

Do you plan to see Miss Juneteenth? Let us know what you think.