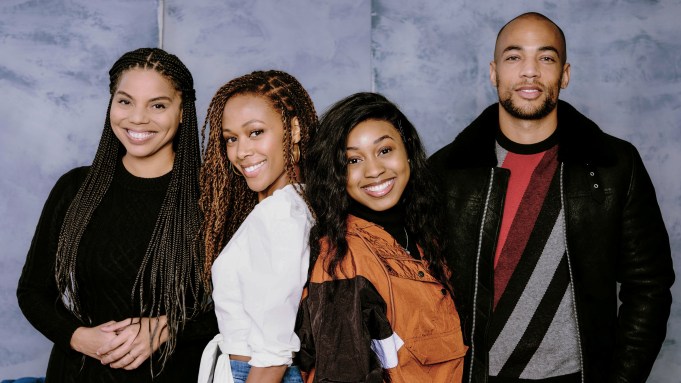 First-time feature director Channing Godfrey Peoples makes her Sundance Film Festival debut with Miss Juneteenth, a film that spotlights the annual Juneteenth celebration — a day that commemorates the abolition of slavery in Texas on June 19, 1865, two years after the Emancipation Proclamation — and its staple beauty pageant.

“I grew up with Juneteenth so it was just second nature to me,” said Texas-native Peoples during her stop at Deadline’s Sundance.

“We continue to celebrate that the same way every year,” said Peoples who was joined by the film’s stars Nicole Beharie, Alexis Chikaeze, and Kendrick Sampson. “There’s parades, there’s blues music, there’s barbecues. And in the centerpiece of it is the Miss Juneteenth Pageant. It’s a Scholastic beauty pageant for young African American women to gain college scholarship.”

The pic centers on former beauty queen Turquoise Jones (Beharie), a single mom who holds down a household, a rebellious teenager, Kai (Chikaeze), and pretty much everything that goes down at Wayman’s BBQ & Lounge.

Turquoise was once crowned Miss Juneteenth, a title commemorating the day slaves in Texas were freed. Though life didn’t turn out as beautifully as the title promised, Turquoise, determined to right her wrongs, is cultivating her daughter to become Miss Juneteenth, even if Kai wants something else.

“First of all, the title Juneteenth, you’re like, ‘what is this going to be about?’ And the assumption is that it’s a period piece, right?,” said Beharie. “When you think about the actual term Juneteenth, June 19th, people getting their freedom a little bit late, and then this ends up being a tale about these two women, one a younger woman, who come into their own in a different way.”

Check out the rest of the conversation above.