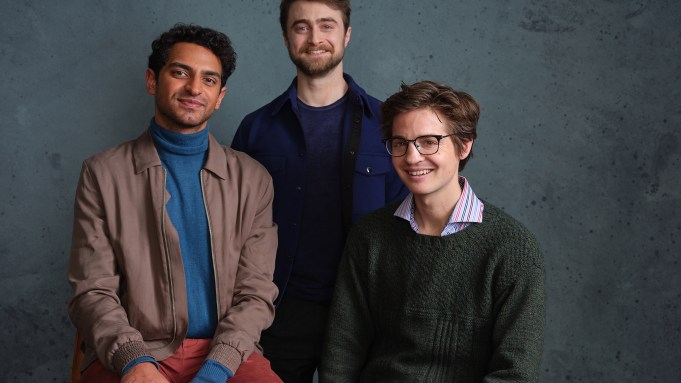 In Simon Rich’s show Miracle Workers, Daniel Radcliffe gets his wings as a control-freak angel called Craig—a role he says he had to take as soon as Rich told him the premise.

“Sometimes you just find material where you’re like, ‘I want to do this, I want to be a part of this,” Radcliffe told Deadline at the Sundance Studio. “And that was what this was from the moment that I read the book and spoke to Simon about the possibility of doing it as a series.”

Radcliffe immediately called his agents and said, “I basically said yes on the phone, make it happen now?”

Set around the character of God, played by Steve Buscemi, the show looks at the divine as a failing corporation.

“He’s the CEO of a company called Heaven Inc.,” Rich explained, “which is the company in the sky that basically runs and manages Earth. Like a lot of corporations over the years, it’s just gotten increasingly ramshackle and decrepit. There have been budget cuts, the population of Earth has increased, and Heaven Inc. finds itself worse and worse off.”

Pushed to the brink, God concludes that it’s better to end it all and start over.

“He decides in the first episode that he’s not going to throw good money after bad,” Rich said. “He’s going to blow up the Earth and fulfill his other dream, which is to open up a restaurant.”

Enter Radcliffe and co. “A bunch of angels in the Department of Unanswered Prayers, which is the equivalent of the IT department, it’s as low in the company as it gets, have to convince him to change his mind,” Rich said. Making a bet, the angels wager that if they can answer a prayer every two weeks, then God must save the Earth.

For Radcliffe, his trajectory as Craig sees him learning to take risks in order to make some dreams come true and alter the Earth’s doomed future. “He’s very very scared of failing so he’s narrowed his word and the remit of the prayers he answers to only the very very small, easily achievable prayers,” Radcliffe said, “which he puts a lot of care and work into, but which aren’t actually affecting the world as a whole.”

While bold prayer answering moves can end up “killing a lot of people inadvertently”, Craig learns to spread his wings eventually, alongside his co-star Karan Soni, who plays an archangel.

“You think he has the dream job,” Soni said, “working in the penthouse of Heaven, then very quickly you realize that my job is a nightmare because God is very childish and I’m pretty much babysitting my boss.”

To hear more from the team behind Miracle Workers, take a look above.
The Deadline Studio is presented by Hyundai. Thanks to our sponsor Inkbox and partners West Elm & Calii Love.