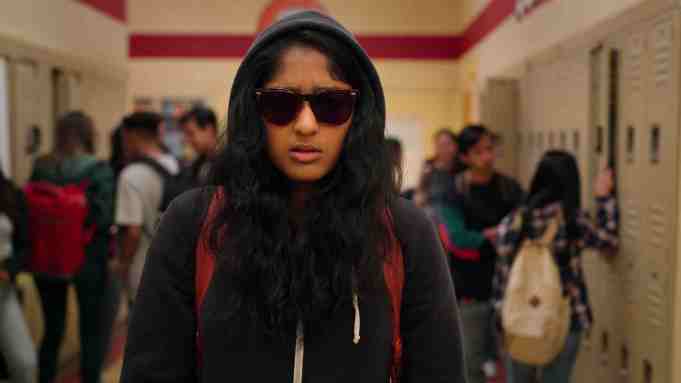 “Both Mindy and I have lost a parent, so we have experienced that sort of pain,” says Never Have I Ever co-creator Lang Fisher on some of the emotional foundation for the acclaimed Netflix coming of age series from Mindy Kaling and the former Brooklyn Nine-Nine Co-EP.

“But I think for us, what we wanted was a show that had depth,” Fisher adds today in the latest installment of our Deadline At Home video series of the Maitreyi Ramakrishbnan-led dramady that launched on the streamer on April 27.

Clock on the vide above to see more of my conversation with Fisher and Kaling from our respective homes.

A very well-crafted deep dive into the complex and contradiction-filled life of a contemporary first-generation Indian-American teenage girl, the 10-episode first season of Never Have I Ever shattered stereotypes and genres. As well, with efforts to contain the coronavirus keeping most of the world at home, Never Have I Ever became the most watched show on the platform around the globe in the weeks after its debut (You can watch my review here).

“The pandemic was bad for the world, but really good for our show,” Kaling says honestly. “Because everyone was trapped they became so much more opened minded about what they were going to watch,” the multiple Emmy nominee explains of how she believes Never Have I Ever connected with audiences so intrinsically. “The other thing too is that people really wanted to watch funny stuff,” Kaling notes, with the caveat that Never Have I Ever had much more to offer besides laughs.

Now, there’s been no official word yet if Never Have I Ever is coming back for a second season. However,, you can be pretty sure you’ll be a winner if you bet it is.

In the meantime, check out Mindy Kaling and Lang Fisher on creating the show in the video above.