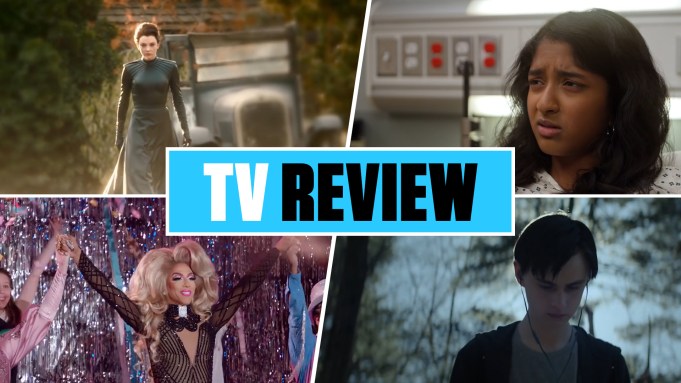 Television production remains shut down nearly everywhere except Iceland and South Korea because of the coronavirus pandemic, but the streamers and premium cablers still have a deep bench of new series hitting the small screen.

A coterie that will see one offering as the show you have to watch – as you can see by clicking on my video review above.

Rolling out the players, Thursday saw the premiere of We’re Here on HBO and today sees the first three episodes of thriller Defending Jacob launch on AppleTV+. April 26 will have the debut of Penny Dreadful: City of Angels on Showtime, and the next day will witness the launch of Never Have I Ever on Netflix.

With its premiere episode already available to watch online today before it hits Showtime on Sunday, the sequel of sorts to the Victorian Era-set Penny Dreadful moves to 1930s Los Angeles and a cauldron of racial, social and political discord ripe for evil influences.

Influences that come in no small part in the form of Natalie Dormer as shapeshifting demoness Magda in the 10-episode first season. The Game of Thrones alum is joined in the John Logan-created City of Angels by Nathan Lane, Daniel Zovatto, Kerry Bishé, original Dreadful regular Rory Kinnear, Adriana Barraza, Michael Gladis, Jessica Garza and Johnathan Nieves in this tale of murder, American Nazis, under-siege Chicano neighborhoods and a world about to shift into world war.

RuPaul’s Drag Race vets Bob the Drag Queen, Eureka O’Hara and Shangela Laquifa Wadley are heading for the heartland and some very distinct identity politics in We’re Here, which started its six-episode run Thursday night on HBO. With its title lifted from the famed LGBTQ activist chant of the 1990s, the series created by Stephen Warren and Johnnie Ingram gets very up-close and personal in some very unexpected ways.

Set to drop April 27 on Netflix, the Mindy Kaling- and Lang Fisher-created Never Have I Ever is the small-screen inauguration of star Maitreyi Ramakrishnan – which is a pretty big platform to set out on. The Universal Television coming-of-age comedy from EPs Kaling, Fisher, 3 Arts Entertainment’s Howard Klein, David Miner and Tristram Shapeero is a deep dive into the complex and contradiction-filled life of a contemporary first-generation Indian-American teenage girl.

Kicking off today on AppleTV+, Defending Jacob sees Chris Evans return to the small screen in this drama based on William Landay’s 2012 novel of the same name. Directed by The Imitation Game’s Morten Tyldum the Mark Bomback steered eight-episode limited series also stars Downton Abbey alum Michelle Dockery and Knives Out’s Jaeden Martell as a family grabbling with accusations that their son is a killer. Upcoming Halo frontman Pablo Schreiber, Oscar winner J.K. Simmons and Tony and Emmy winner Cherry Jones round out the core cast of Defending Jacob.

So, with Defending Jacob and We’re Here already out there, Penny Dreadful: City of Angels online before its Sunday opener and Never Have I Ever set to launch on Monday, what is the show you have to watch? Well, you’ll have to watch my review about to find out.