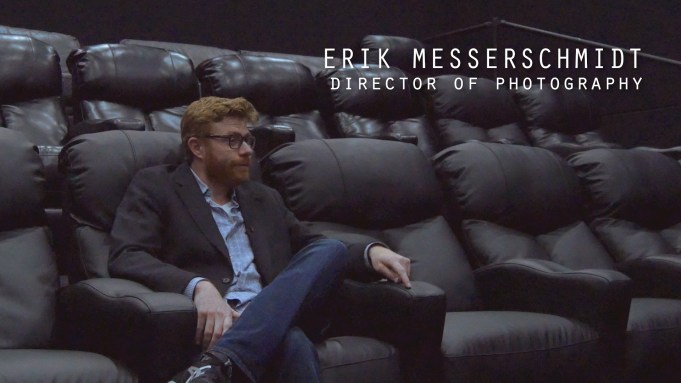 Erik Messerschmidt first worked with David Fincher as a Gone Girl gaffer—in collaboration with DP Jeff Cronenweth. But Messerschmidt got his chance to mine the auteur’s rich, iconic aesthetic as cinematographer of Netflix’s crime drama Mindhunter.

Created by Joe Penhall, with Fincher on as a director and executive producer, the 1970s-set series follows two FBI agents (played by Jonathan Groff and Holt McCallany) who look to expand criminal science by delving into the psychology of murder, coming uncomfortably close to the real-life monsters who would later be deemed “serial killers.”

Messerschmidt has been praised this season for the striking, atmospheric visuals he brought to Mindhunter—his first full series as a DP— though he prefers that his work remain invisible, operating beneath the surface. “Hopefully, the audience doesn’t notice my work; hopefully, they are only seeing what’s happening on screen between the characters,” the DP says on the latest edition of Deadline’s Production Value video series. “That’s the goal.”

Sitting down with Deadline at RED Studios, the cinematographer gave his take on Fincher, one of the most enigmatic, powerful artists in contemporary American cinema who, like Messerschmidt, lets his work speak for itself. Having RED design an innovative, ergonomic camera—deemed the Xenomorph—specifically for the series, Fincher is famous for his technical acumen. While there is definitely stylization involved when it comes to Fincher’s work, from Messerschmidt’s perspective, the director’s focus is only ever on story and the characters evolving within it.

“He knows that if we can make the camera more efficient, if we can work in a more elegant, simpler way with a smaller crew and still achieve visually what we’re trying to do, he gets more time with the cast,” Messerschmidt explains. “All of that technical stuff that we’re doing is really in service of making the project better.”

The DP also dissects the creative restrictions Fincher and his crew imposed on themselves, in pursuit of a unified, impactful aesthetic. “On Mindhunter, we have some very specific rules that we try to follow—storytelling rules, coverage rules,” the DP says. “We don’t move the camera very much. We have a limited range of lenses; we work on primes, we don’t use zooms. We only shoot three or four lenses for the whole show, and try to stay very disciplined, in terms of how we tell that story.”

To be clear, these aesthetic concepts are guidelines, not “hard-and-fast rules.” Certainly, though, Messerschmidt sees the benefit in establishing creative restrictions, deciding up front which tools will be used to tell a story. In the end, each careful choice made by the series’ team comes down to one concept: motivation. “I don’t think it’s necessary to always move the camera. We don’t move it just because we can,” Messerschmidt explains. “We have to think about: What is it within a scene that is dictating what’s happening on screen? How are we supporting that with what we do with the camera?”

While Fincher is, and will continue to be, a defining voice for Mindhunter, he was joined in the directing of Season 1 by Asif Kapadia, Tobias Lindholm and Andrew Douglas. To hear more from our conversation with Messerschmidt—as he discusses the challenges of episodic television, working with various directors to craft a cohesive experience—check out our conversation above.