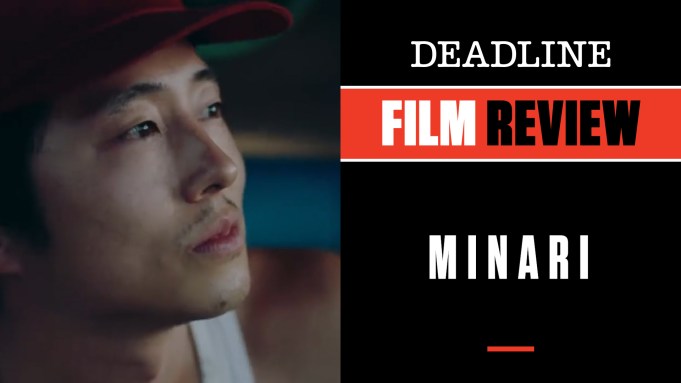 Just about a month before the South Korean phenomenon Parasite made history by sweeping several major categories at the Oscars including Best Picture, the warm and beautifully acted story of a Korean family striving to make a living on a farm in Arkansas, Minari, did the same thing at the 2020 Sundance Film Festival, where it swept both the Grand Prize and Audience Prize for narrative films. I wouldn’t be at all surprised to see it also follow Parasite’s breakthrough at the Academy Awards and turn up in a few categories come Oscar Night. It deserves all the acclaim it will get.

Writer-director Lee Isaac Chung used his own family and experience growing up in Arkansas to weave this fictional tale of a Korean-American family uprooted from California by their father/husband Jacob and moved to an Arkansas farm, where he has hopes of achieving the American dream. It does not prove an easy, but Jacob (Steven Yeun) is determined to give it a go, despite the increasing objections of his wife, Monica (Yeri Han), who feels they are throwing away a comfortable life in chasing a dream that seems pretty distant. The arrival of the uber-feisty Grandmother (Youn Yuh-jung) makes sorting out the new life in the Ozarks even a bit crazier, and she and David (Alan Kim), the younger  of the two kids — and the director’s alter ego here — go toe to toe. We see much of the story through David’s innocent eyes as these life-changing events take place.

Into the mix also is his sister Anne (Noel Kate Cho), who is dealing with her own growing pains in adjusting to the new surroundings. Will Patton plays a fervently religious neighbor named Paul, who offers his own acts of kindness in order to help Jacob against all odds. The title, Minari, refers to a peppery Korean herb that comes into its own but not usually until its second season. That clearly is meant also to apply to this family — trying to hang together, make a house a home and a dream a reality.

Their laughs, love, struggles, arguments, missteps, disappointments, hopes and dreams make this something of a universal tale that many families, of all backgrounds, probably will identify with. It certainly is a reason that the film was the talk of Sundance and, now being released in the midst of a pandemic, is a film that offers reassurance that tough times can be overcome. In some ways, it harkens back to classic cinema like The Grapes of Wrath, but its warm sensibilities, never over-sentimentalized, hit right at the heart. Minari might be small in its scope, but it looms large in every other way. This is not a movie to like, it is a movie to love.

Chung gives it an authentic tone and a family worth knowing. Yeun is low-key and effective, never more so than toward the end, when his whole dream seems to be crashing down on him and conflicts with Monica threaten to destroy everything he has worked toward. Han is excellent as well, and the kids, particularly an irresistible Alan Kim as David, score sweetly here. But it is the veteran star Youn who steals every scene she’s in as the ever-unpredictable Soonja. A Best Supporting Actress nomination would not be out of order. Shooting much of the film in their native Korean language and using subtitles, the genuine nature of how this family communicates with one another is a refreshing touch added here that most immigrant stranger-in-a-strange-land American movies wouldn’t do. The choice is a wise one and adds immensely here.

Brad Pitt’s Plan B, a company with a great track record that includes Best Picture winners 12 Years a Slave and Moonlight along with many other recent landmark independent films, is behind this one as well. A24 distributes it beginning Friday. Producers are Dede Gardner, Jeremy Kleiner and Christina Oh. Check out my video review with scenes from the film at the link above.

Do you plan to see Minari? Let us know what you think.