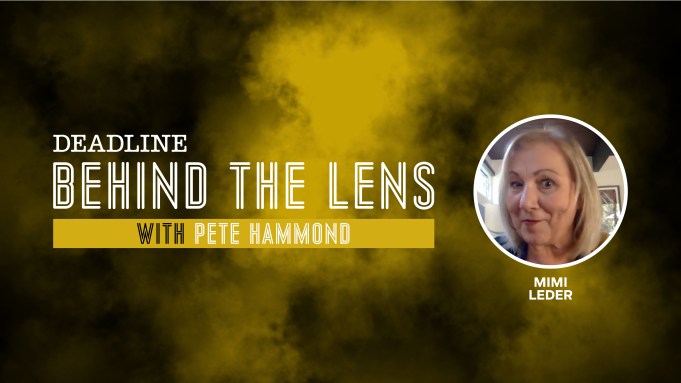 The celebrated director Mimi Leder, veteran of so many television and movie successes joins me today for this episode of my Deadline video series Behind The Lens. We really cover the waterfront of her remarkable career starting with her personal revelation that George Clooney was a “goddamn movie star” when she looked at him through the lens as she directed him in his, and hers as well, first major motion picture The Peacemaker.

The occasion of this interview was obstensibly to talk about her current project, Apple TV+’s all-star series The Morning Show, and she does, as well as talking about how COVID shut it down as she was working on season 2. She talks in detail about what she thinks will be the effects of this worldwide pandemic when they are allowed  to return to the set. She describes how  it will be a completely different world for the industry. We also talk about the experiences she had on so many successful shows from LA Law to China Beach to ER to The Leftovers to Luck, her Emmy nominations,  her pioneering work as a woman in the business starting with working on her filmmaker father’s B movies with titles like  I Dismember Mama and Attack Of The Horny Gorilla, movies that turned out to be family affairs when she was growing up learning the ropes. That took her to AFI and her status at age 21 as the first woman in that program. She came in as a cinematographer, but in no time discovered that what she REALLY wanted to do was direct. And direct she has. Her most recent feature film, the Ruth Bader Ginsberg origin story, On The Basis Of Sex was a hit, but she also candidly discusses being tossed into “movie jail” after the failure of Pay It Forward, and how female directors pay a greater price for a flop than male directors.

There is so much more here, and it was great fun, and a great learning experience to go Behind The Lens with Mimi Leder and her remarkable career. You DON’T want to miss this one. To watch our conversation just click the link above.