As Packaging Comes To An End Today, Squabbles Over Grandfathered Projects Likely To Continue; Analysis + WGA Q&A
Read the full story
May 21, 2021 3:12pm 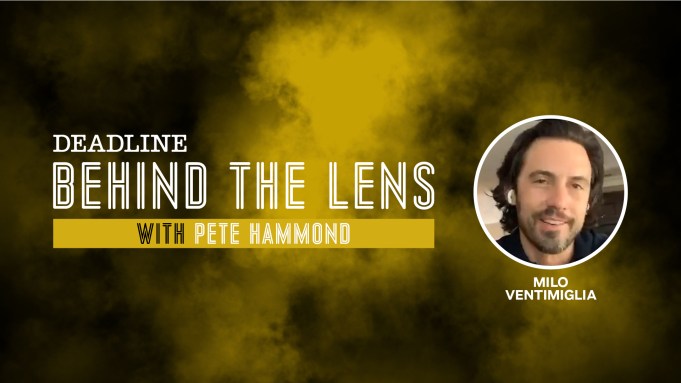 Milo Ventimiglia has wrapped his fifth season as Jack Pearson on NBC’s top scripted series This Is Us, and now he looks forward to shooting the sixth and final season of 18 episodes, which is set to debut midseason in early 2022. He joins me for this week’s episode of my Deadline video series Behind the Lens — not really to talk about his work in front of the camera but rather behind it. Ventimiglia’s second directorial effort for the show just aired Tuesday and now is available to watch anytime at NBC.com.

His latest foray in the directing chair follows an episode he helmed for Season 4 — proof, he tells me, that he must not have screwed it up the first time. Actually, Ventimiglia has been active in directing with his own production company, and especially producing numerous projects since forming Divide Pictures in 2003, so going behind the camera is not new, but it is something he is as passionate about as his acting career, which continues in high gear. He actually got his start calling the shots by doing some interstitial programming spots and progressed from that valuable experience.

Ventimiglia talks about the logistics of shooting the show with all the Covid precautions in place, as well as the necessity to choose an episode in which he was not heavily involved as an actor. Playing Jack, the father who is deceased in all the contemporary scenes of the series that spans several decades, the directing opportunity gives him the rare opportunity to be on set with the actors who play the grownup versions of Jack’s kids including Kate (Chrissy Metz), Kevin (Justin Hartley), and Randall (Sterling K. Brown), but he says he always treats it like he is a “guest” on their set.

This fifth season episode is titled “Jerry 2.0,” and the 1996 movie Jerry Maguire figures prominently in both the contemporary and flashback scenes including the opening sequence, which is the only part of the episode in which Jack actually appears. Because it relies on using clips from the film, producers had to get permission from both star Tom Cruise and director Cameron Crowe, and Ventimiglia explains how that process was touch-and-go right up to start of production. Our conversation begins with talk of plans for how the show will be coming to an end next season (and maybe another TIU directing gig?), so to watch just click on the link above and journey Behind the Lens with Milo Ventimiglia.

Watch a new edition of Behind the Lens every Friday.

Check out a clip from the episode here:

To see the entire “Jerry 2.0” episode of This Is Us directed by Milo Ventimiglia, go to NBC.com.