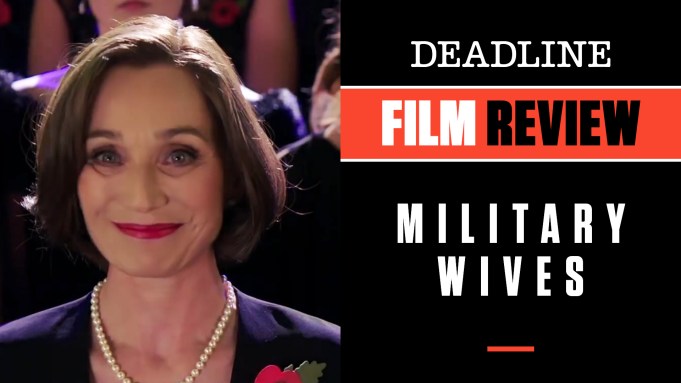 The feel-good vibes of the new British dramedy Military Wives is just what the doctor ordered for these harsh times. Based on my own intel, people seem to be craving some true, inspiring and yes uplifting movies now, and this one definitely delivers on that front. In fact, it was one of the best I saw at last fall’s Toronto Film Festival, where it was smartly picked up by Bleecker Street which has been hoping against hope to put it in theaters — a good idea since it could have done well on the specialty circuit and maybe even cross over. Instead, it will be hitting Hulu and digital platforms on Friday.

Military Wives comes from the Oscar-nominated director Peter Cattaneo, whose The Full Monty became a surprise worldwide hit in 1997 and was among that year’s Best Picture nominees. This has a little in common, but instead of a ragtag group of British men-turned strippers, this tells of a group of English wives-turned-singers. Storywise it is the origin story of the choral group known as Military Wives, those women who bonded together after their husbands shipped off to Afghanistan and formed a unique choir which in this case led all the way to a special performance of their inspirational original song at the Royal Albert Hall. The Military Wives concept later became a British TV series and has spawned satellite groups now in the hundreds around the world.

For the film, screenwriters Rosanne Flynn and Rachel Tunnard take us into the lives of a group of wives on one particular base. Kate (Kristin Scott Thomas) is the titular leader and spouse of the ranking officer (Greg Wise) who looking for worthwhile activities for the group, when one of them, Sarah (Amy James-Kelly), suggests they form a choir. Because her husband happens to be the sergeant in charge on the base, Lisa (Sharon Horgan) gets the assignment to put it together, one she takes only because she does have some musical background and actually goes about writing a song the women will eventually sing at Royal Albert Hall.

It is however a rocky road to get there, especially since the early incarnation of this group does not exactly offer hope they will ever be in harmony. Things brighten up though when Jess (Gaby French) shows exceptional talent, and, making her a lead brings a certain discipline and decent enough sound that it becomes safe to take out the earplugs when they perform.

Meanwhile, there are individual stories we learn about including a rift between Lisa and Kate, whose only son Jamie was a wartime casualty, that threatens to derail the whole idea. There is also a member who adds poignancy when some bad news comes in regarding her husband, as well as other moments when various women get their moment in the sun.

The entire cast is up to the task at hand delivering performances that hit just the right notes. Thomas, as usual, is exceptional as the senior member here, but Horgan is an ideal complement. Wise adds nice compassionate touches as well, particularly in one scene where he consoles Kate while sitting in the car that belonged to their son. Splendid acting. Among the supporting cast there is also nice work from Ria Amarteifio as Lisa’s daughter, Frankie.

Producers are Rory Aitken, Ben Pugh and Piers Tempest. Check out my video review above with scenes from the movie.

Do you plan to see Military Wives? Let us know what you think.