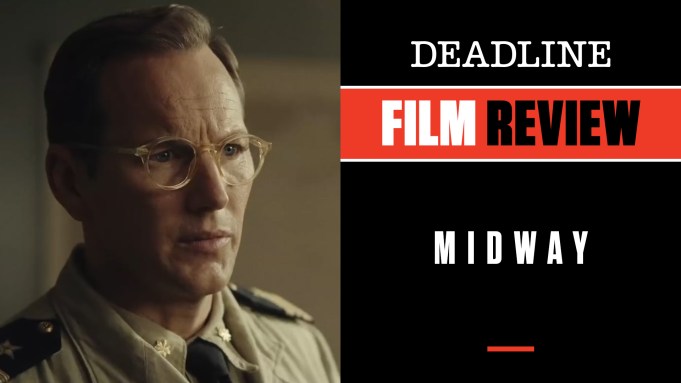 Steven Spielberg, Clint Eastwood, Mel Gibson, Christopher Nolan and others have proved that with the right director and approach, there is still great life to be found in stirring World War II movies — from Saving Private Ryan and Letters From Iwo Jima and Hacksaw Ridge to Dunkirk. But in the case of special effects groupie Roland Emmerich (Independence Day), the storied Battle of Midway that helped win the Pacific Theater is just an excuse for some hot-shot aerial battles, stilted dialogue that sounds like it is out of a 1940s recruitment film and a script that recycles every possible cliché in the genre.

That is not to say Midway isn’t entertaining in its own old-fashioned way, but it just doesn’t really have a reason for being beyond the CGI of it all in an era where that just simply isn’t enough. I am not even sure why they bothered since this infamous battle in the Pacific was made into a star-studded 1976 epic that at least had a number of legends in the cast including Charlton Heston, Henry Fonda, James Coburn, Glenn Ford, Robert Mitchum, Cliff Robertson and Toshiro Mifune.

This time around a number of game actors are on board, but most like Woody Harrelson as Admiral Chester Nimitz, Dennis Quaid as Vice Admiral William Halsey and Aaron Eckhart as Col. Jimmy Doolittle don’t nearly have enough to do but plot out strategy and seem wasted here, though Eckhart seems comfortable in the role at least. Instead, we have an obvious attempt to attract a young audience whose idea of a superhero is very different than the truly heroic men who made up the Greatest Generation and fought this war in the name of patriotism and love of country we don’t see much anymore. Furthermore, Emmerich has invested most of it with a video game mentality designed to put the viewer in the cockpit with the hotshot pilots facing death at every turn in some spectacular missions.

This Midway starts with the Japanese sneak attack on Pearl Harbor on December 7, 1941, but the re-creation of it here is a rather pale imitation of what Michael Bay achieved in the superior epic Pearl Harbor. That movie, probably because of Bay, wasn’t a critical favorite, but at least it had a story and believable human beings, something sorely missing from novice screenwriter Wes Tooke’s script. This one looks like any number of WWII programs released while the war was going on, at least in terms of creating memorable roles for its actors.

Game of Thrones star Ed Skrein is at the center of the action as Dick Best, a real-life hero presented here as a daredevil wild card, a loose cannon ready to take matters into his own hands. He is married to Anne, the only female role of any note and — despite the best efforts of Mandy Moore, who is stuck with a lot of supportive spouse lines — it simply is one note. The young heartthrob actors joining them include Nick Jonas, Darren Criss, and Keean Johnson. They acquit themselves as well as can be expected in a movie that puts more importance on the visuals than the human stars, which also include a number of Japanese actors who actually fare a bit better in giving dimension to their counterparts. But best of all, hands down, is Patrick Wilson, who also finds a real living, breathing human being in the most interesting character here, Edwin Layton, the codebreaker who performed his own brand of heroic service, saving many lives in the process.

Still if you’ve never seen a WWII movie, this one likely will work for you on some visceral level. But if you have seen about 400 of these in the past 80 years since Hollywood has been churning them out, it’s strictly the advanced technology and the crackerjack flying sequences that are worth a trip to the theater. Like I said, Midway can be fun and entertaining to watch, but it seems like a movie that is a step out of its time with nothing new to say. The end credits are the best, as they pay tribute to the real-life heroes these actors play and fill us in on the rest of their lives.

Producers are Harald Kloser and Emmerich. Lionsgate releases it today. Check out my video review with scenes from the film by clicking the link above.

Do you plan to see Midway? Let us know what you think.