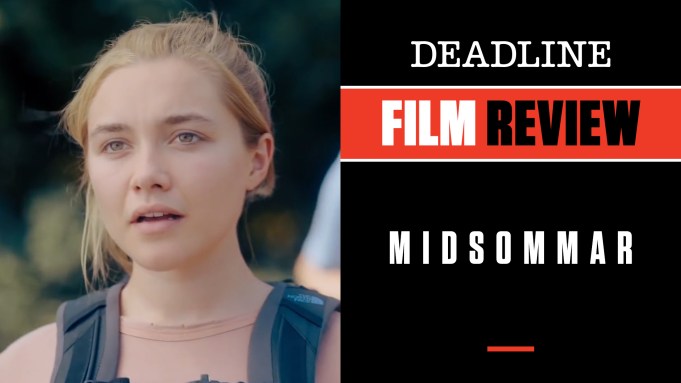 We had just one movie grabbing attention over the holiday weekend, Spider-Man: Far From Home. which had Spidey and his high school friends taking on a European summer excursion that turns pretty lethal at points. But there was another opening that I just caught up with a couple of days ago that also is about some young Americans on what they thought was going to be a fun little summer romp in Sweden that makes that Spider-Man trip look like a senior citizen cruise by comparison. If you want a movie that will sincerely disturb you, that will mess you up for days, that will truly screw with your mind, then have I got the ticket for you!

Midsommar comes from writer-director Ari Aster, who won acclaim last year for the haunting Hereditary. He has decided to stick with that arty horror genre but really changes things up this time around by creating an unusual setting in a summery Swedish countryside where it never seems to ever get dark. This is what you might call a bright-light fright flick. It centers on a young couple who seemingly are about to break up, with unreliable BF Christian (Jack Reynor) announcing he is going to take off for a once-in-a-lifetime trip to a remote Swedish village in order to study the unique midsummer celebration with the “family” of an anthropology friend named Pelle (Vilhelm Blomgren). Christian’s buddies Mark (Will Poulter) and Josh (William Jackson Harper) also are coming along.

A family tragedy enters the picture for his GF Dani (Florence Pugh), and she soon finds herself joining the group in order to get a change of scenery. If that was her goal, then mission accomplished. Once they get there, they discover the place is weirder than they might have imagined, populated by a large group of villagers who seem stuck in another century — all wearing white linen outfits, surrounded by flowery motifs, weird murals in their buildings and other oddities. They seem like a cheerful enough lot, but our tourists might get a clue things are going to be trippy when they all are encouraged to drink a substance that sends them off into strange places in their heads, but nevertheless the seemingly friendly and welcoming vibe of the locals, along with the ever-assuring and somewhat mysteriously upbeat Pelle, keeps them in check and away from running straight back to civilization. Of course, this being a horror film — albeit one that runs nearly 2 1/2 hours — things slowly get really crazy for the Americans as Aster’s scenario goes waaaaaaay out there. Enough said about the plot.

Aster clearly is an exceptionally fine filmmaker and makes no false steps here, but the story he has concocted, along with the human toll on sick graphic display, makes you wonder what he was drinking when he dreamed this whole thing up. This is one of those films that is hard to shake, try though you might. The visuals are so striking that it is tough to get out of your head. Certainly where it all leads is predictable, but the way he does it is inventive for fans of this kind of thing. It is not something for which I would offer a blanket recommendation, but if you are looking for something truly original in the genre and not just more of the same dark traps that horror has fallen into in the ast few years, Midsommar is for you. But beware: you may find it hard to unsee some of what Aster has cooked up for his faithful this time around. A24 has it in wide release. Check out my video review at the link above which includes scenes from the film.

Have you seen or do you plan on seeing Midsommar? Let us know what you think.