Continue to Deadline SKIP AD
You will be redirected back to your article in seconds
Skip to main content
December 9, 2020 6:00am 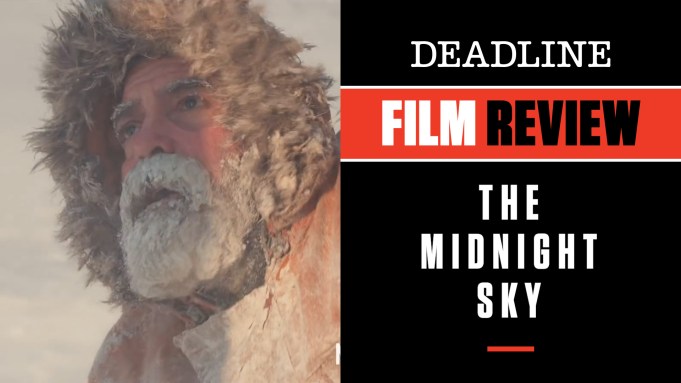 George Clooney takes on triple duties as star-director-producer of The Midnight Sky, and it proves to be just the right fit, and his best behind the camera since 2005’s multi-Oscar-nominated Good Night and Good Luck.

Like the latter film, Midnight Sky’s subject matter not only serves as exciting filmmaking, it also manages to serve as a dual look at the best and the worst mankind is capable of, ironically triumphing in outer space but screwing up our own planet. It is an intriguing premise given a human and humane focus by Clooney, who makes sure that despite the dire apocalypse facing Earth, there is still some glimmer of hope. It is a tricky balancing act, with set pieces worthy of epic moviemaking, yet placed on an intimate scale that never falters.

If there is another film it recalls, it would be On the Beach, Stanley Kramer’s 1959 tale of impending doom that revolved around a group of people in Australia, their days numbered, as they await the nuclear fallout from an atomic war to overtake them and the last remnants of human life. Midnight Sky is built in such a way as to offer a little light at the end of the tunnel, though, and therein lies the different feeling you get from this film. Clooney does offer a brief homage by including a clip of the Kramer movie, though.

The script by Mark L. Smith (The Revenant) is based on the 2016 novel Good Morning, Midnight by Lily Brooks-Dalton and introduces us to the lone human in sight on the planet, a scientist named Augustine who is stationed in the most frigid corner of the Arctic. An apocalyptic event has struck Earth and decimated it — we are not sure exactly what — but Augustine desperately is trying to connect with a group of astronauts deep in space for the past two years and now planning to come home. He needs to stop them and warn them of what they would be coming back to before it is too late, and time is of the essence since it is clear he is gravely ill, likely late stages of cancer He urgently is trying to get his message up there, in particular, to Sully (Felicity Jones), who also is trying to communicate. She is a member of the crew that also includes the Commander Adewole (David Oyelowo), pilot Tom Mitchell (Kyle Chandler), navigator Sanchez (Demian Bichir) and flight engineer Maya (Tiffany Boone). Complicating matters is that Sully is pregnant, a story detour needed when Jones herself got pregnant. It turns out to be an inspired addition that wasn’t in the book or original script drafts and adds an extra human dimension that works beautifully.

The middle portions of the film focus on the group in space, bookended by Augustine’s plight — which includes an unexpected companion when he discovers a 6-year-old girl (Caoilinn Springall) who apparently has been left behind during the big event. For Augustine, it gives him a much-needed human connection, a reason for life to continue. Springall has few words but says it all with a haunting, unforgettable face, and their “partnership” ultimately is quite touching. Clooney delivers a low-key but enormously effective turn that never hits a false note. In the book the character was 70, but looking gaunt and tired, Clooney has no trace of a movie star persona and fits the bill.

Scenes outside both the spacecraft and the Arctic station are thrillingly conceived, with the latter’s blinding icy conditions making for a particularly grueling sequence for Augustine and the girl. The production values — from Martin Ruhe’s exquisite cinematography, Jim Bissell’s production design, Stephen Mirrone’s editing, the sweeping visual effects and a career-best musical score from Alexandre Desplat — are all first-rate and add immensely. It is only a shame that this film, made by Netflix yet shot on 65MM for big-screen exhibition as well, cannot play all the theaters for which it was also intended in addition to streaming that begins December 23. If ever there was proof of the need for cinemas, this movie provides it. It does get a theatrical release first in whatever theatres Netflix has booked that are still open beginning Friday.

In addition to the two main points of interest, flashbacks are included to explain Augustine’s earlier life and perhaps what motivated him then — and now — with the character played in younger years by Ethan Peck, Gregory Peck’s grandson, and a love of his by Sophie Rundle. The match between Clooney and Peck is right on the money, and, thanks to sophisticated technology, the pair actually share the vocal performance as their own voices are melded together flawlessly. Clooney has been careful not to rush any of the action, which makes for a deliberately paced adventure but one well worth the effort put in to watch it. It is exceptional.

Producers are Clooney, Grant Heslov, Brad Dorros, Keith Redmon and Cliff Roberts. Check out my video review at the link above with scenes from the film.