Warner Bros Discovery CEO David Zaslav On Rumored Merger Talks: "We Are Not For Sale"
Read the full story
August 9, 2021 7:00am 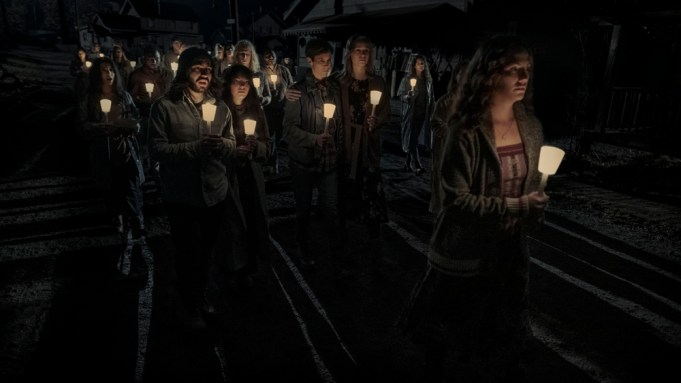 Welcome to Crockett Island. Well….sort of. We’re getting the first look at Midnight Mass, the seven-episode horror series from The Haunting of Hill House creator Mike Flanagan, starring Hamish Linklater and Zach Gilford. Netflix has released the first trailer and announced a September 24 premiere date for the limited series.

Flanagan also introduced the series to fans in a letter. “As a former altar boy, about to celebrate 3 years of sobriety, it’s hard not to see what makes this so personal. The ideas at the root of this show scare me to my core,” Flanagan wrote.

“There is darkness at work on Crockett Island. Some of it is is supernatural, but the scariest is born of human nature. The darkness that animates this story isn’t hard to see in our own world, unfortunately.

But this show is about something else as well…faith itself. One of the great mysteries of human nature. How even in the darkness, in the worst of it, in the absence of light – and hope –we sing.

I hope you enjoy our song.”

Midnight Mass tells the tale of Crockett Island, a small, isolated island community whose existing divisions are amplified by the return of a disgraced young man (Gilford) and the arrival of a charismatic priest (Linklater). When Father Paul’s appearance on Crockett Island coincides with unexplained and seemingly miraculous events, a renewed religious fervor takes hold of the community – but do these miracles come at a price?

Check out the trailer above and some first-look images below.