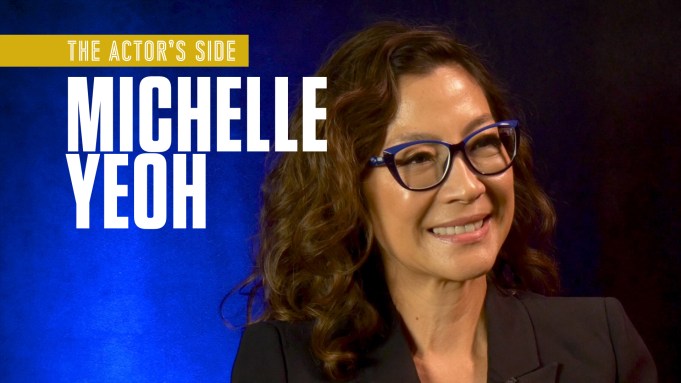 Michelle Yeoh is no stranger to big blockbuster movies, having appeared over her long career in hits like the James Bond film, Tomorrow Never Dies, Guardians Of The Galaxy 2, and of course Ang Lee’s Oscar winning Crouching Tiger Hidden Dragon, not to mention acclaimed performances in movies like Memoirs Of A Geisha  and The Lady, to name a few. She also has a big fan following, currently from her role in Star Trek Discovery, but it is perhaps as Eleanor, the stern mother in Crazy Rich Asians that has brought her as much notoriety and positive reviews as any role in her career.

During her recent visit to tape the latest episode of my Deadline video series, The Actor’s Side, we discussed the role and why she feels it is her hommage to mothers she knows personally. She brings real dimension to a part that in other hands might have come off as a sort of evil presence in the romantic comedy that rocked the box office, became the first major studio film with an all Asian and Asian American cast in a quarter century, and has been nominated for a Best Picture Comedy or Musical Golden Globe, as well as Outstanding Cast at this year’s SAG awards. It has also sparked Supporting Actress Oscar talk for Yeoh who talks about the cultural influences on her character and how she balanced the portrayal in order to be strong yet also understanding.

Yeoh also talks about why Crouching Tiger was also such an international phenomenon and points to director Ang Lee, saying directors are the key reason she takes on a lot of projects. She also discusses her early career in martial arts movies by crediting her ballet training, and why dance goes hand-in-hand with those action movies in which she excelled for years.

To watch our conversation just click on the link above.

To see past episodes of The Actor’s Side go to https://www.facebook.com/ActorsSide/