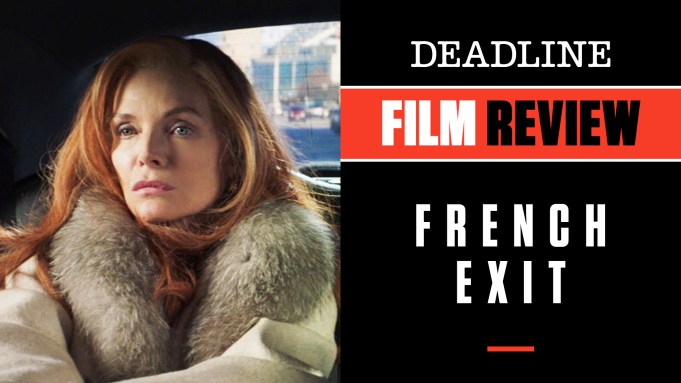 The New York Film Festival wrapped tonight, and its closing-night film, French Exit, is a winner that firmly places Michelle Pfeiffer, a three-time past nominee, back in the heart of the Best Actress Oscar race. She tops an aces cast that is sublime in every way in an absurdist comedy that is surreal, dark, witty, quirky, humane, and oddly touching. Stylistically it recalls everything from Wes Anderson to Harold And Maude but it sways to its own distinct rhythms. It is a movie its director Azazel Jacobs (The Lovers, Terri) describes as about “a group of lonely people collecting, and becoming less lonely as they find each other”. As audiences find this little gem when Sony Pictures Classics releases it on February 12 (still in time to qualify in this extended awards season), they probably will feel a little bit that way as well. All that said, French Exit likely is not for everyone, but those who embrace its considerable pleasures are in for a special treat.

A big part of the joy for me was the superb ensemble cast including Pfeiffer, gloriously back in a rich leading role that is worthy of her talents, but also terrific performances down the line by a cast offering up bon mots of choice dialogue in perfectly honed deadpan delivery. It all comes from the imagination of novelist Patrick deWitt ( The Sisters Brothers, Terri), who wrote the film adaptation of his widely praised 2018 book — one that on its surface wouldn’t necessarily lend itself to cinema, it might seem, but boy does it ever in the hands of this cast and Jacobs.

Pfeiffer plays Frances Price, a 60ish, once-wealthy Manhattan socialite, widowed for a dozen years, who had planned to “die before my inheritance ran out” but who is told she no longer is solvent. Her life appears to be falling apart until a childhood friend named Joan (Susan Coyne) offers her use of the Paris apartment that has remained empty. Soon she is off on a ship to Paris, with about $200,000 in cash (literally) from what she could get by selling off her NYC possessions, and with her son Malcolm (Lucas Hedges) and a cat named Small Frank, who, as we later learn, might or might not be the reincarnation of the dead husband Franklin Price. Her son is engaged, or was, to Susan (Imogen Poots), but due to his own stunted emotional growth and connection to his mother, has left her behind, never even having told Frances about an impending marriage.

deWitt builds this surreal world along the way, adding quirky character after character to the mix including another American expatriate living in France who calls herself Mme. Reynaud (a scene-stealing Valerie Mahaffey), and a fortune teller from the cruise ship named Madeleine, deliciously played by Danielle MacDonald (Patti Cake$). She specializes in telling the older customers on the cruise that she sees their death in the near future, and has a quickie with Malcolm after work. When the cat runs away one night, Frances freaks out and wants back the kitty she believes is Franklin. She hires a private detective, Julius (Isaach De Bankolé), to track down the “witch” from the ship in order to materialize the cat/dead hubby for a séance. It gets crazier from there as Susan eventually shows up with a new boyfriend, Tom (Daniel diTomasso), as does Joan, and soon we have a menagerie of disparate souls finding one another through a very weird connection. Underneath the surface, particularly for Frances, are life-and-death issues that all are reflected in darker moments played with humor like no other film I have seen in some time, but one that magically hits just the right tone.

In a virtual NYFF press conference on Friday, the director explained his inspirations for wanting to take on this book. “The humor and humanity of Patrick’s writing drew me in as it has always done, but this particular story is what motivated me,” he said. “I love [Luis] Buñuel. I love Rules of the Game. Stories about class are what draws me in, and when I think about (Jacques Tati’s) Playtime, and The King of Comedy and Trouble In Paradise, and all these films, I recognize in retrospect are all about class, and the idea that there is this sense of theatrics that happen when people get packed in a room at all different levels, kind of socio-economic levels, and what happens when things shift in their lives that is what was a huge attraction as I finished the film – literally this week.”

Pfeiffer said she didn’t even wait to finish reading the French Exit script before signing on. “It is this odd world filled with odd people — as Azazel describes them, people marooned on an island who end up finding each other,” she said Friday. “What could, and in some ways on the page, could be caricaturist is not because both Azazel and Patrick have an ability to bring you into this world, this sort of New York socialite world. You bring them in, and make them three dimensional inside. We are all really living in our own little bubble, and depending what bubble you grew up in, you develop certain survival skills, and they are different depending on what your experience has been. I read the script first and immediately followed up with the novel, and halfway through I said, ‘I’m in,” because you just know when something is really special because it doesn’t come along all that often.” With French Exit, Pfeiffer has reconnected with one of those “really special” roles, maybe her best since the ’90s.

Hedges also knew this was something special. In the book, the son is older, but Jacobs had just seen Hedges on Broadway in The Waverly Gallery and knew he would be right for the role. Hedges reacted to the script right off the top. “I had a very distinct feeling that this was a world I love and a voice I love. I felt that way 10 pages into the script,” he said. “It was clear early on this was completely different. I was really taken by the ways in which the characters thought and spoke. I loved the script, loved this world, I loved the character, I loved Patrick’s imagination, and Azazel is such a generous human and artist. It was just no question.” Hedges noted that before this one came along, his standards for finding good scripts were getting lower and lower.

For a story that has such dark undertones, the comedic aspects really stand out. deWitt said he doesn’t know any other way. “I think of comedy as a coping tool, primarily,” he said. “I tend to tell dramatic stories, but I can’t not tell stories through the lens of the comedic or the ridiculous. It is something I come to without really thinking of it. This is just a way I am inclined to tell stories. It just comes natural.” deWitt admitted that the biggest change from novel to screen was the ending, and that was at the urging of Jacobs. Without giving anything away, it was the right decision, something now deWitt also believes was right.

“It was really trying to find what the ground was in this surreal world, and in this humor, and just make sure these are still breathing humans who are struggling with these issues, even with the humor,” added Jacobs.

Pfeiffer said she had a great time making this one. “I would definitely put it up there, definitely in my top five of wonderful film experiences. The cast was so extraordinary, the writing,” she said. “When you get that kind of writing it starts there. You are not struggling with it. It sort of carries you. You are not having to work it. The concern for me having read the novel, and the script obviously, was that the tone was so specific, and yet really hard to describe, and that was my big concern that this has to be exactly right. It could go wrong so quickly, but I knew Azazel just hit it on the head. We worked hard, as you do when you are doing a smaller independent film on a smaller budget and tight schedule.

Good indeed. And let’s also give a huge shout-out to that cat who plays Small Frank, as well as Tracy Letts, who does his hilarious and droll voice-over. Hopefully release plans hold and the pandemic doesn’t stand in the way of this unique and memorable film getting out there from Sony Classics and Stage 6 Films.

The Lead Actress race is a tough one this year, already looking very competitive, but it is hard to imagine a better performance from a long Oscar-overdue star than what Pfeiffer delivers here. Astonishingly, she hasn’t been Oscar- nominated since 1992’s Love Field, but this might be her best film work since 1989’s The Fabulous Baker Boys. I would also do a shout-out for Mahaffey’s dead-on performance for Supporting Actress, and you’d be hard-pressed to find five better adaptations than what deWitt has done with this screenplay. Thanks to the earlier NYFF premiere of Sofia Coppola’s On the Rocks, and now French Exit, this festival showed us that dreary 2020 is good for at least one emerging trend, and that is the welcome addition of some very smart comedies with their own unique voice.

Check out my video review of the film by clicking the link above.