Continue to Deadline SKIP AD
You will be redirected back to your article in seconds
Skip to main content
June 18, 2019 9:51am
2Comments 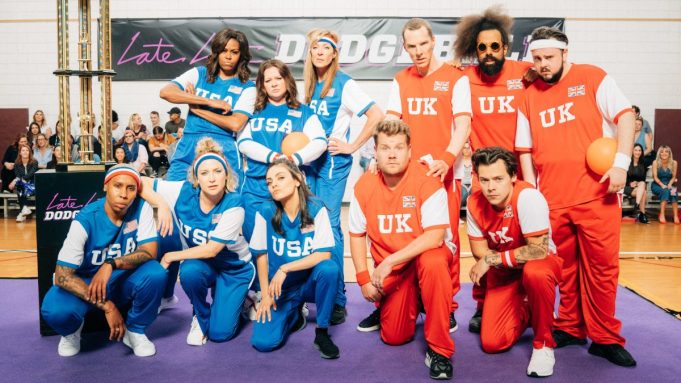 It’s the face-off of the year: Michelle Obama vs. James Corden in a no holds barred match of dodgeball. The former First Lady and The Late Late Show host assembled a team of the most ruthless dodgeball players for a game that pitted the USA against the UK in a game of hitting each other with semi-soft rubber balls.

In the video above, it seems like Obama and Corden are about to do another round of Carpool Karaoke as she has done in the past. But it’s not long before they get into a debate about whether or not the USA is better than the UK and vice versa. As a result, they decide to settle this like any normal adult: with a game of dodgeball.

Obama assembles a team of top-notch American superstars including Kate Hudson, Mila Kunis, Melissa McCarthy, Lena Waithe and Allison Janney. Corden puts together a roster of his own all-star athletes from the UK: Harry Styles, Benedict Cumberbatch, John Bradley and… Reggie Watts — who isn’t really from the UK, but it doesn’t really matter to Corden.

When the gauntlet is thrown down (or in this case, the first ball is thrown) the trash talk commences and hilarity ensues. Watch the video above.