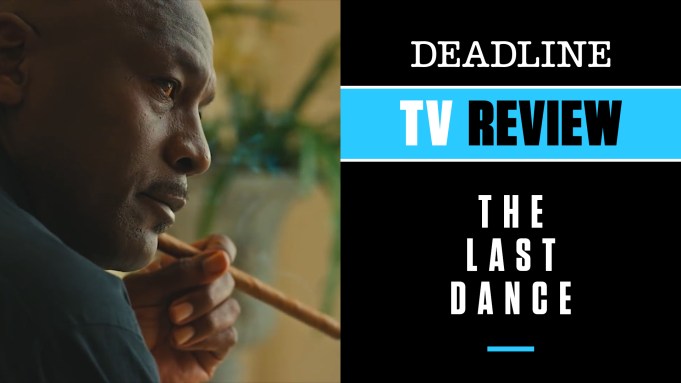 Eager, and perhaps way overly eager to reopen America in the midst of the coronavirus pandemic, Donald Trump has recently said he is tired of watching 14-year-old basketball games on TV with all sports leagues shuttered.

Well, the more than two-decade-old basketball games that are the fuel for ESPN’s upcoming The Last Dance are exactly the kind of small-screen excitement many of us could use right now, sports fans or not.

Packed with unseen footage that has been under lock and key since Bill Clinton was president, the comprehensive 10-episode docuseries that tips off Sunday focuses on Michael Jordan and the Chicago Bulls’ quest for a sixth NBA championship. That 1997-1998 quest is the primary beat of the Jason Hehir-helmed and Netlfix co-produced effort on excellence in motion. At the same time, the stunning and captivating Last Dance is also a deep mix of the evolution of Jordan into one of the greatest athletes of all time via determination, drive and leadership, as I say in my video review above.

Now, you may debate if MJ is greater than say the brilliance of a Serena Williams, Pele or Muhammed Ali — it is a fair discussion of a pantheon of power. However, regardless of who is the GOAT in your opinion, Last Dance is a damn convincing 500-minute argument that no one ever in any field, sports or otherwise, played and worked as hard as Jordan, now the principal owner of the NBA’s Charlotte Hornets.

Now, it’s no great leap to compare The Last Dance with the Oscar-winning O.J.: Made In America docuseries that ESPN triumphantly ran in 2016. Both are in depth, both are as much about the play as the player, and both are high-quality long looks at African American sports figures. But, let’s be clear, that’s really where the comparisons should end. These are very different stories by their nature, with the former being one of triumph and the latter a tragedy on so many levels.

First set to debut June 2 on the Disney-owned sports cabler, The Last Dance was moved to this weekend late last month not long after the NBA and all other sports league went dark due to the COVID-19 crisis. For a sports-starved nation, the domestic run of The Last Dance is the real deal that display a caliber of player that we will likely never see again, even when all the arenas open up.

With a soundtrack including the likes of Prince and hip hop godhead Eric B & Rakim plus interviews with a scathingly honest Jordan; Bulls teammates like Scottie Pippen, Dennis Rodman and Steve Kerr; philosopher coach Phil Jackson; a couple of U.S. Presidents and more, The Last Dance may in fact be one of the greatest sports documentaries ever made – which, even for the home of the stellar 30 for 30 series, should be the point when you consider the subject matter.

Stay at home, stay safe, click on my video review for The Last Dance, then get courtside on your couch this Sunday for a slam dunk. As for you in the rest of the world, The Last Dance can be seen on Netflix starting this weekend too.