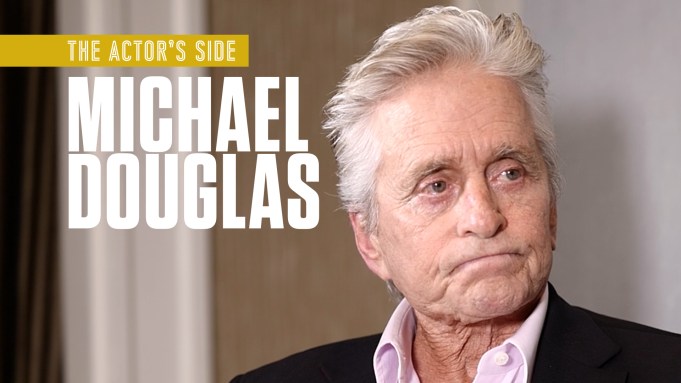 Michael Douglas got his big break in series television in the early 70’s in his multi-Emmy nominated supporting role in ABC’s The Streets Of San Francisco .  Despite winning an Emmy for playing Liberace in the HBO TV film Behind The Candelabra , he had not returned to series TV until this season when Netflix lured the two-time Oscar winner to co-star with Alan Arkin in Chuck Lorre’s comedy series about aging in a society that is more digital than analog, The Kominsky Method .  He plays Sandy, a past-his-prime actor who now teaches it to a group of young students, in a funny/sad look at life as it starts passing us by.  It is hard to believe this is Douglas’ 50th year in the business, one he followed his iconic father Kirk into and quickly found his own footing, eventually winning a Best Actor Oscar for Wall Street, as well as an earlier one for producing 1975 Best Picture winner One Flew Over The Cuckoo’s Nest.   He won a Golden Globe in 1969 as Most Promising Newcomer – Male for the film Hail Hero, and exactly a half century later lived up to that promise by winning for Lead Actor in Television Comedy Series for Kaminsky Method.  There is lots of Emmy buzz too.  I caught up with Michael in New York City (where he lives) for the latest episode of my Deadline video series, The Actors Side. We talk about his sterling career, the changing ways of the business, what lured him back to TV, the many roles he has played and how he would define them  , his dad’s original involvement in Cuckoo’s Nest  , and much much more in a wide ranging interview. You can watch the edited version of our conversation just by first clicking the link at the top of this post, or watch the whole thing by clicking the link below.

To see past episodes of The Actors Side just go to https://www.facebook.com/ActorsSide/

Check out the edited interview above, and the uncut version below.