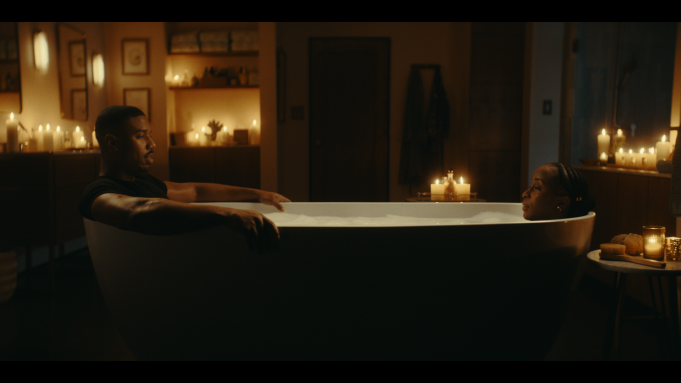 Michael B. Jordan is making his Super Bowl advertising debut in a plug for Amazon’s voice-recognition system Alexa.

The spot, titled “Alexa’s Body,” will run 90 seconds online and will premiere as a 60-second ad during the fourth quarter of Super Bowl LV on Sunday. (Watch the game-ready version above.)

Jordan has displayed his well-developed physique and leading-man looks in films like Creed, Black Panther and the forthcoming Tom Clancy thriller Without Remorse (which will soon hit, yes, Amazon Prime Video). Those aesthetics are the key to the ad, which starts with a group of executives in a generic office marveling at the design of a new, spherical Alexa device.

“I literally could not imagine a more beautiful vessel for Alexa to be inside,” one woman says. At that moment, she gazes out the window and spies an ad with Jordan in a matinee-idol pose, which starts her daydreaming about a different “vessel” for the voice-recognition system: Jordan himself.

In her reverie, Jordan teaches the married woman French phrases, helps her cook and even joins her in a candle-lit bubble bath, where he reads her a steamy passage from her audio book. The over-the-top intimacy of the interactions is so exasperating to the woman’s husband that he soon starts contradicting her voice commands, like “add bath oil to my shopping list.”

The commercial was created by Amazon and agency Lucky Generals. It extends a run of several recent Super Bowl appearances for Alexa, whose ads have featured a number of A-list stars like Harrison Ford, Rebel Wilson, Cardi B and Anthony Hopkins.