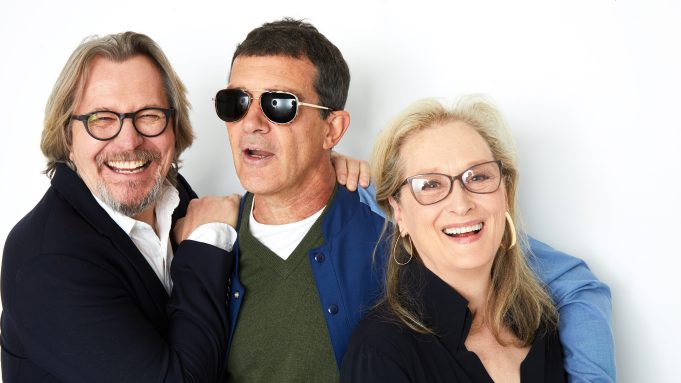 The Panama Papers, and what they revealed about complex financial systems designed to protect the uber-rich, organized crime and the fiscally immoral, are the subject of Steven Soderbergh’s The Laundromat, written by Scott Z Burns. Burns was joined in Deadline’s TIFF studio by Jake Bernstein, who wrote the book, Secrecy World, on which The Laundromat is based, and actors Meryl Streep, Antonio Banderas and Gary Oldman, for a spirited discussion about inequity, malfeasance and Mossack Fonseca, the firm at the center of the Panama Papers disclosures.

“Clever people will always exploit people who are a little bit less clever, or who are out of the realms of opportunity,” Streep said. “Money gives you opportunity, and so the little people are the ones who are screwed. This gross inequity in our society globally is just exacerbated by these practices, and as long as the people who are in charge of enforcing financial rules and regulations around the world are funded by the very people that are exploiting these systems, we’re doomed. And it’s going to break, because there will be a reckoning. It just might be very, very ugly.”

Banderas pointed out that the answer to the question, “Do you want to pay more or less taxes?” will always be, “Less.” It’s this answer, he said, that allowed the systems exploited by the super wealthy. “It’s so complicated, so chaotic, the system that they created.”

Countered Streep: “But a lot of us poor slobs really pay our taxes. We really do, because we believe in the system, that it’s going to benefit the common wheel—that if you work hard, you pay your taxes, you do it right.”

In greed, said Oldman, people lose their sense of reason. “It masks clear thinking, and, I think to a point, one’s morality. It’s like an illness; it’s like a disease. How much is enough?”

Oldman and Banderas play Mossack and Fonseca respectively, narrating the film directly to camera, in a string of expensive tuxedoes. Burns and Bernstein said they had spoken to the real Mossack and Fonseca, who have little remorse for what they did. Said Burns: “They were operating within the law, and it’s really easy to demonize them. But hopefully, one of the things you realize in the film is that it’s the system that they’ve been allowed to build a business within that’s the problem, beyond them.”

Noted Oldman: “They spent three months in prison; some might argue that it was three months too long, or that some other people should have really gone down with them.”

For more from the team behind The Laundromat, watch our video above.