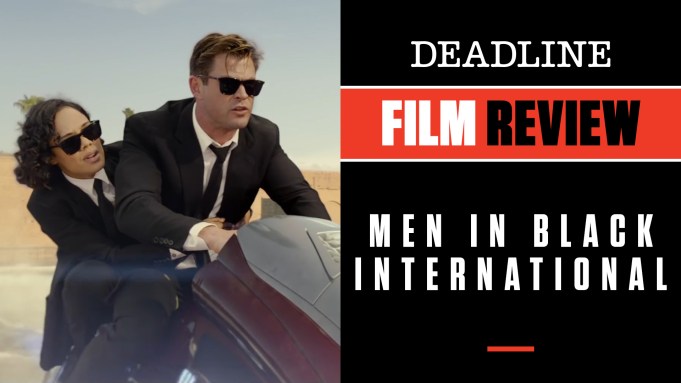 Did you ever hear the phrase, “You’ve gone to the well one too many times”? That definitely applies to this hapless and misguided attempt on Sony and Amblin’s part to revive the Men in Black franchise without director Barry Sonnenfeld or stars Will Smith and Tommy Lee Jones, whose onscreen chemistry was so crucial to its success the first three times around in 1997, 2002, and 2012 (the last edition making over $600 million worldwide). They might have saved a few bucks this way, but you get what you pay for.

This is not meant to be a knock on new Men in Black: International stars Chris Hemsworth and Tessa Thompson, who try hard to make this work, but it is just not the same — and certainly not what audiences will expect from the sequel. Hemsworth and Thompson already were a good team in both Thor: Ragnarok and Avengers: Endgame, so I guess the thinking was they could just drop them into a separate existing franchise and no one will have a second thought about it. Maybe Smith and Jones can take over the next Thor if this bait-and-switch works. But whatever the behind-the-scenes reasoning, the chemistry this time is zero between them. Writers Art Marcum and Matt Holloway and director F. Gary Gray (Straight Outta Compton) can try to dance around this fact with a lot of frantic visual tricks and alien co-stars, but it doesn’t disguise the problem. Perhaps another pairing of stars might have made it work, but sadly not this one.

Hemsworth, though, gives it his all and shows again that in the right project he definitely has movie-star charm to spare. Give him some Harrison Ford-type parts in the future. Here he is the suave, carefree Agent H, now teamed with Thompson’s Agent M, a character with a lifelong desire to be part of secret agency dealing with extraterrestrial and alien enforcement — even, we see early on, as a child in her encounter with one of those creatures. When she applies for a job with Agent O (Emma Thompson returning from MIB3 and doing wonders in a couple of scenes), she is told they don’t hire, only recruit. But when it becomes known that M already has the right references in terms of alien interaction, she is brought on as a rookie and set up with H for a mission that is all over the map. It takes them from Paris to London to Marrakesh to Italy in search of a magic “box” that can help control the universe and must be kept out of the wrong hands.

They also have to deal with evil alien twins (played by Laurent and Larry Bourgeois) and the belief that there is a mole in the agency. All this merges together in frenetic fashion with lots of flashy CGI fights along the way and only a modicum of the witty repartee of the earlier films. Smith and Jones had the deadpan dialogue down pat and threw it off in style. Here it looks like everyone, even the comic-relief little creature Pawny voiced by Kumail Nanjiani, is working overtime to please. Nanjiani as Pawny in fact is a virtual quip machine, and he does what he can with the lines, but you could only imagine what a Robin Williams could have done with the role.

Among the rest of the cast, Rebecca Ferguson gets four stars as Riza, an old flame of H’s who he visits in a remote island castle in order to retrieve that magic box. She has evil plans but delivers them with relish. Back at headquarters, there is efficacious Rafe Spall as Agent C and Liam Neeson at the big boss Agent High T. Something’s going on with them, but it is pretty transparent where it is all headed.

That goes for the whole movie. The franchise has seen better times.

Producers are Laurie MacDonald and Walter F. Parkes. Sony opens it today. Check out my video review above featuring scenes from the film as well.

Do you plan to see Men in Black: International ? Let us know what you think.