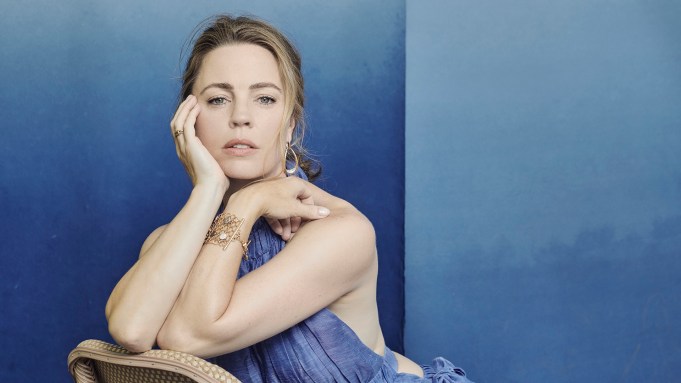 Between shooting the first and second seasons of AppleTV+ Series The Mosquito Coast, Australian Melissa George (In Treatment, The Slap) has made an entrance into French cinema with the Emmanuelle Bercot-directed Peaceful (De Son Vivant). At Cannes for the film’s premiere, George dropped by the Deadline studio, where she discussed Peaceful and  reminisced about working with David Lynch for Mulholland Drive, which is also premiering its 4K restoration at the festival.

Peaceful follows Crystal (Deneuve) as she attempts to make peace with her son Benjamin (Benoît Magimel)’s terminal cancer diagnosis, as he himself comes to terms with his ending. While George plays Benjamin’s estranged ex-partner and mother of his unrecognized teenage son (Oscar Morgan).

The film’s message is one of ‘no regrets’ and nothing left unsaid, as Benjamin’s doctor, remarkably played by the real-life version of his character, oncologist Dr. Gabriel A. Sara, encourages him to ‘clear the desk’ of his life.

“The thing that got me is I’ve got two beautiful sons,” George said. “If anything was to happen to them, and you’re in Catherine Deneuve’s shoes where she’s saying goodbye to the love of her life—no mother should say goodbye to their son before their time. That’s what gets me. You should never have to say goodbye to your child.”

With Mulholland Drive getting its 4K restoration premiere at Cannes 20 years after its debut, George also recalled how David Lynch had cast her all that time ago.

“The way I got that part was I arrived off a flight from Australia, and I went to meet Johanna Ray who’s cast all of his movies, from Blue Velvet, to all of them. I went into her office. I was 19 years old, and she took a polaroid of me. That was it, there was no casting. David Lynch put the polaroid pictures on a table, and he basically meditated on our faces and he came to my face and said, ‘This is the girl.’ I mean, I had the iconic line in the movie, ‘This is the girl.’ I didn’t have to do much.”

Once they were on set, George was puzzled by the film. “At one point, I asked him what the film was about, and he said, ‘Whatever you think it’s about is what it’s about.’ And I’m like, ‘Yeah that doesn’t help me a lot, but thank you.'”

Now, since France is George’s adopted home, George is especially gratified to be in Bercot’s Peaceful and hopes to work with her again. “To be involved in French cinema, the chances are very slim. I’ve noticed even though I’m working in France now and I’m working in French, I’ll never be a Parisian actress and that just devastates me, because I can only do my best to hopefully be accepted into cinema in France.”