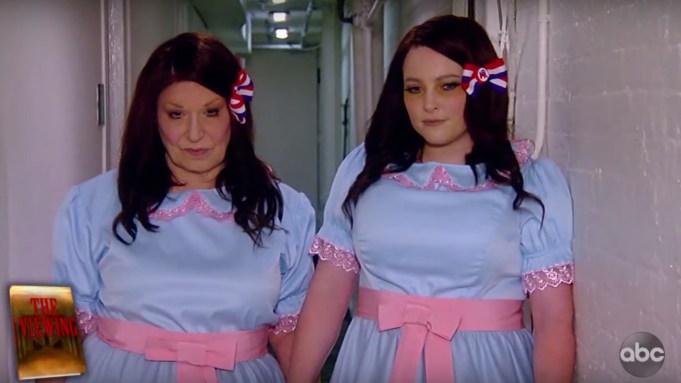 It took Halloween, Stephen King and a mutual loathing for President Donald Trump to bring The View‘s usually sparring conservative Meghan McCain and liberal Joy Behar together: After two consecutive days of some tense and shouty moments, ABC’s daytime talker was pretty much Kumbaya this morning as the five co-hosts dressed up as their favorite King characters.

Behar and McCain were the Grady Twins – those terrifying, butchered “Come and play with us, Danny” little ghost girls from The Shining. Watch the clip above to see how Trump figures into it all.

“We like this because we’re a team,” said Behar about the costume choice, taking the arm of her usual favorite combatant.

Check out the moment in the clip above around the 7:28 mark, and the ever-horrifying Grady Twins Shining scene, and The View‘s parody of it, around the 4:30 count. (Watch clips from today’s other Halloween episodes, as well as a James Corden bit with a special witchy guest below.)

The View‘s King-themed Halloween outing (moderator Whoopi Goldberg was Pet Sematary‘s Church the cat; Abby Hunstman a blood-soaked Carrie; and Sunny Hostin a spot-on Pennywise the Clown from It) was just one of the now de rigueur costume episodes that Daytime does every Oct. 31.

On the syndicated Live With Kelly and Ryan, the hosts and guests Mark Consuelos and Kal Penn paid tribute to the year’s best viral moments (managing to squeeze an Exorcist bit into the mix as well as Baby Shark, Joker, and, again, Pennywise, among others).

And while Daytime TV has been doing the Halloween thing for years now, James Corden got a head start on the trick or treating last night with a faux-commercial featuring Melissa Joan Hart reprising her Sabrina the Teenage Witch role, albeit with a topical spin: Her politico warlock cousin James (Corden) grants her a newly acquired power to call up anyone for a deposition, from Mike Pence to the president of Ukraine. So, yeah, Subpoena the Teenage Witch.

Watch clips of them all here: