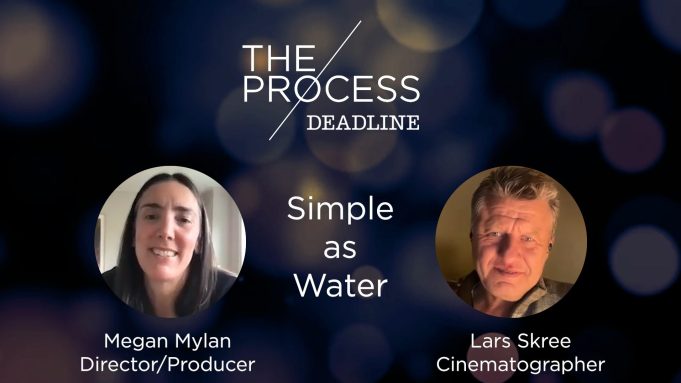 With her latest documentary Simple as Water, director-producer Megan Mylan hoped to capture a sense of both intimacy and scale, juxtaposing the “massiveness” of the exodus of refugees from war-torn Syria with “these very close-in family stories,” in a way that never felt performative.

A key collaborator helping the Oscar winner to achieve this vision was Lars Skree, the Danish cinematographer behind such acclaimed titles as The Kingmaker, Generation Wealth, The Look of Silence and The Act of Killing, who has been honored over the course of his career with Camerimage’s Golden Frog and the Sundance Film Festival’s Cinematography Award for World Cinema – Documentary, among other accolades.

Part of what made Mylan think of him for the project was his work alongside director Janus Metz on the 2011 P.O.V doc Armadillo, for which he followed a platoon of Danish soldiers as they went about fighting the Taliban.

“Armadillo was…this character study; this portrait and meditation. What I loved is that it felt like it had all of this energy and lack of self-consciousness of just unfolding verité, but then with this contemplative, meditative poetic piece just woven in so unselfconsciously,” Mylan tells Skree in the latest edition of Deadline’s The Process. “I mean, I know there was a lot of effort in it, but that was what I was looking for. And it was sort of that mix that I thought you guys achieved so beautifully in that film.”

Simple as Water takes audiences into Syrian families’ quests for normalcy and through a whirlwind of obstacles—to building life anew—examining the impact of war, separation and displacement, as well as the elemental bonds between parent and child. The project filmed in Turkey, Greece, Germany, Syria and the U.S. over the course of five years came to fruition through the joint efforts of small crews scattered across the world; many of those involved behind the scenes were Syrian refugees, themselves.

Like Armadillo, the film would be less about grandiose “banner moments” and more about “the flow of emotion,” observing and connecting with refugee families in “small moments” as they grappled with “the intensity of…loss.”

Of course, in order to bring a film like Simple as Water to life, it would be essential for Mylan to track down an assortment of documentary subjects, and establish a real connection with them—always with “a deep respect for the sacred space” she was being invited into. “The trust-building and the access was so fundamental. It always is, but we were trying to enter families’ lives who were in such fragile situations and there had been so much media coverage, she says. “So we spent probably a month for every day of shooting, just on the research and the finding of the families, and what were the through lines we were looking for.”

For Skree, serving stories like those depicted in the film means “being humble”—taking the time to “put cameras down” and “show a sincere interest for those people,” even if it’s just over a shared cup of tea.

While Skree started out as a still photographer, the work of a cinematographer ended up feeling like a better fit for him, given the collaborative nature of that craft. “I felt it was very lonely to be a still photographer,” he admits. “I like [that] when you make a film, it’s kind of a house you build up. You don’t know how it’s going to end. It’s very organic.”

Part of the draw toward documentary cinematography, in particular, was the realization of how important it was to be “on the ground, on the first line,” to capture the truth of any given situation, which may be “completely different” from what you read about at home.

Mylan hopes that when people watch Simple as Water, they’ll experience and connect with the reality faced by the families depicted, and take a few things away. “When people escape war zones, they should be given safe passage. They shouldn’t have to get on smugglers’ boats,” she says. “Families should be reunited. They shouldn’t have to spend two years with fathers and children missing out on childhood and all of those key moments, and children should be able to enroll in school.”

The filmmaker’s principal hope, though, is that audiences will exit their experience with the film feeling that same sense of “closeness” to the families that she did while filming. “It’s really just a sense of connection and a sense of that very simple thing of, we all have so much more in common than we do different,” she says, “that a parent’s love for their child is deep, regardless of where you were born.”

Simple as Water made its world premiere at the 2021 Tribeca Film Festival and had a limited theatrical run before debuting on HBO on November 16. The film is also now available for streaming on HBO Max. Mylan produced with Robin Hessman, with Hazem Obid, Alaa Hassan, and Yara Hassan serving as co-producers. Michael Chin also contributed to the film’s cinematography, as did “Rafia Salameh”—a young woman credited with a pseudonym, who must remain anonymous for her safety.

In their conversation on The Process, which you can view in full above, Mylan and Skree further break down their process of infusing “that poetry that you get from many fiction films” into their documentary, also touching on Skree’s career trajectory and more.