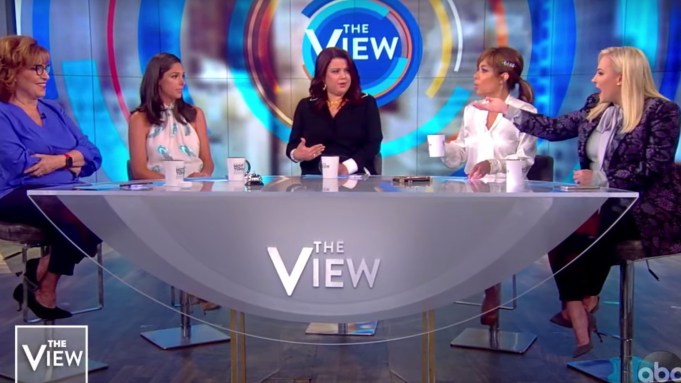 Students around the world were staging school walk-outs over climate change, but The View‘s Meghan McCain was triggered to do the same when co-host, and fellow Republican, Ana Navarro told her to stop screaming.

During an increasingly heated exchange about the government whistleblower who says President Donald Trump made a disturbing promise to a foreign leader, McCain took the conversation around to one of her oft-targeted brain tenants, Julian Assange.

McCain replied, “I don’t know what that means,” to which Navarro responded that she was merely trying to lighten things up. McCain, her voice increasing in volume, conceded that she had worded things in a “clumsy” manner, at which point Navarro said, “Excuse me, I’m two feet away. I don’t need you to scream at me this way.”

McCain again replied, “I don’t know what you just said,” to which Navarro responded with a no-mistaking, “I said don’t scream at me! I’m two feet away.”

In the post-Rosie era, The View doesn’t seem to indulge in arguments like the old split-screen days. Today, no sooner had things gotten testy than the camera cut to Joy Behar (filling in as moderator for a Fridays-off Whoopi Goldberg) who threw the show to a commercial break – but not before the open-mouthed studio audience and viewers at home could hear McCain say, “That’s so rude, Ana” before walking off the set. (She was back post-commercial).

You can see almost all of that in the clip posted on The View‘s official YouTube page, which ends before the walk-out. And since nothing ever stays silent in this whistleblowing era, the good version was soon ricocheting around Twitter.

Just in case ABC somehow makes the full footage scarce, we’ll post a couple screen grabs, including the gasping audience and McCain’s storming. Then watch the good stuff below.

McCain, though, gets the last word. “Another day, another drama,” she tweeted after the show.

Another day, another drama. pic.twitter.com/PWiEkoXboI