Continue to Deadline SKIP AD
You will be redirected back to your article in seconds
Skip to main content
February 10, 2021 6:11pm 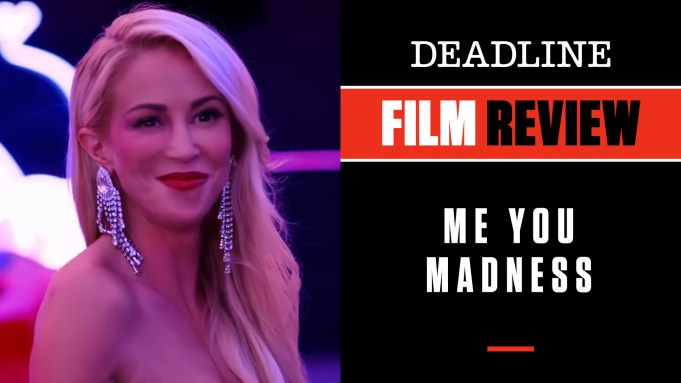 Although she has been acting most of her life, Scotland-born Louise Linton probably is best known in recent years for her connections to the departed Trump administration as the wife of his Treasury Secretary Steven Mnuchin. With her new film — which she wrote, directed, stars in and, most important, financed — Linton is aiming to change the subject to movies. Her movies.

You have to give her props for going way out there on the ledge with Me You Madness, a colorful but mindless confection in which she plays Catherine Black, a designer-dressed and very wealthy hedge fund manager who doubles as a serial killer of various men of all shapes and sizes in her spare time. Her likely next conquest is Tyler Jones (Ed Westwick), a petty thief who stumbles into her sprawling, lavishly appointed Malibu mansion looking for a room for rent. Soon, after a three-way with best friend Yu Yan (Shuya Chang), she beds the studly, if clueless, guy who clearly has no idea of her hobby of carving up guys like him.

But in no time both he, and we, find out what she’s been up to, thanks to a freezer stocked with various heads and body parts. In fact, Catherine, prone to grooving to ’80s pop hits, does a Flashdance-style piece of choreography while seductively embracing the various dismembered parts she retrieves from her storage. Tyler is pretty horrified himself, but not before he gets his own big go-for-broke solo dance number played out in silk robe and skivvies as he makes his moves throughout the many rooms of the Malibu manse all the way into the surrounding hills. If the Golden Globes can nominate Sia’s Music for its insipid production numbers, why not Linton’s movie too? Just askin’.

In a setting that looks perfect for the next edition of The Bachelorette, this largely two-hander plays out as Catherine narrates her own story and thoughts, breaking the fourth wall and directly talking to the audience with pithy one-liners and opinions about how stupid most movies of this genre can be. She doesn’t hide the fact this one is basically a female American Psycho, as she cuts a glamorous figure while doing-in and eating human male delicacies. From buzzsaws to all sorts of sophisticated weaponry, Ms. Black takes no prisoners, but has met her match as the vicious revenge tactics turn to cutesy rom-com. a kind of low-rent Mr. and Mrs. Smith — except that Linton, and Westwick (best known for his stint on Gossip Girl) are no Brad and Angie.

As a Valentine’s weekend diversion, this all might seem like a strange offering, but in its own godawful garishness I still felt compelled to see where any of it was going. It never meets the moment of what Linton clearly hoped it would be, a kind of smart Heathers-like black comedy. It ultimately is just too vapid to be memorable in that way, too undisciplined to really work to the levels to which it aspires. The dance riffs go on forever as Linton clearly has a thing for the ’80s, though neither she nor Westwick is ever going to give Jennifer Beals and Kevin Bacon a run for their money in that department. There is kind of a funny riff between them as she offers up a dizzying array of reasons why she kills men in a bit that comes closest to her political connection to Trumpville when she lists “democrats and independents” among her victims.

The soundtrack is wall-to-wall ’80s, which must have been expensive to clear, but Linton clearly is connected through her Stormchaser Films, as well as Mnuchin — who, before he got his D.C. gig with The Donald, was a key financier of many blockbusters including as EP on Wonder Woman, Suicide Squad, Batman v Superman, etc. This thing probably will earn enough in its VOD life to make Linton’s investment worthwhile. Whether the past star of the likes of Intruder, Odious and Cabin Fever: Reboot has what it takes to land any significant leads without paying for them out of her own pocket remains to be seen. But she seems pretty confident behind the camera and does manage to keep this thing moving.

In other words, it is dumb — yes, dumb — fun if you’re in the mood, but not much else. Hard to seriously recommend for Valentine’s Day, though. Check out my video review with scenes from the STX film at the link above.

Do you plan to see Me You Madness? Let us know what you think.