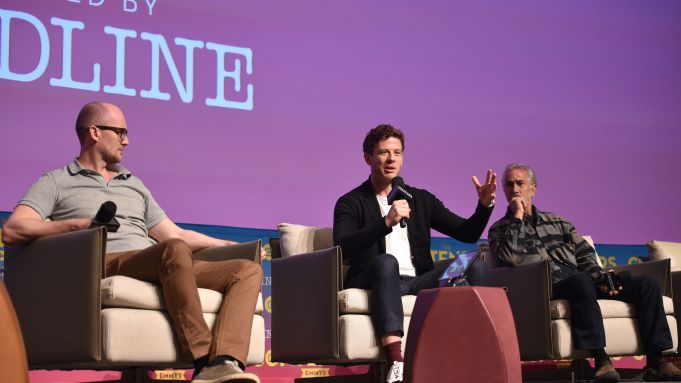 James Watkins came to Deadline’s The Contenders Emmys event with AMC’s McMafia, a fictional crime drama with disturbingly real resonances. Based on Misha Glenny’s nonfiction book of the same name, the title comes from the “franchised out” nature of the modern-day mafia, Watkins explained. “The show has been very close to home in the UK, and they’re talking about a new ‘McMafia Law’ in terms of seizing elicit assets to go after these criminals,” he said.

The show, created by Watkins and Hossein Amini, follows the Godman family, and particularly son Alex, who finds himself drawn into the family business against his better judgment. What he discovers about organized crime in the technological era is, said Watkins, that it’s “very much alive and has transmuted and transformed into this many-headed hydra around the world. Global, transnational crime that is sort of invisible, and hiding under a veneer of legitimacy.”

Watkins was joined on the panel at the packed DGA Theater by actors James Norton and David Strathairn. For Norton, tracking Alex’s journey was complex, owing to the nature of the global shoot across 150 non-chronological days. “He starts as the golden boy of ethical finance in London and goes to the dark side,” Norton explained. “He takes us, as an audience, through that tour of what is the global truth of the mafia.”

Along the way he meets Strathairn’s Semiyon Kleiman, a key player whose mentor-like approach to Alex belies the darkness of his operation. “He treads this fine line between being a seemingly very compassionate man, but his motivations are obviously very mercenary and for his own ends,” noted Strathairn. “One of Semiyon’s seductive devices was to express—and not insincerely—compassion, because there’s that expression: there is honesty among thieves.”

Check out the conversation with the McMafia team above.