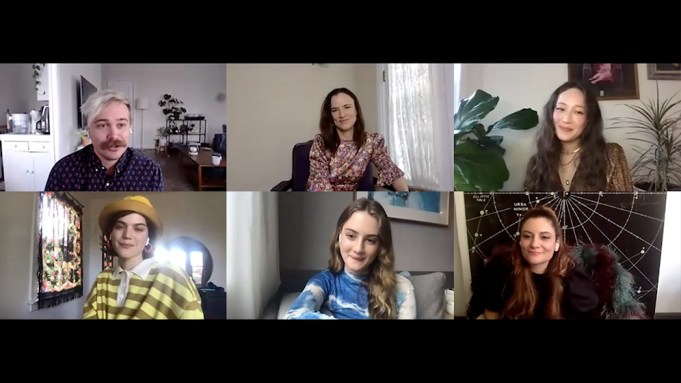 With her first feature, Mayday, writer/director Karen Cinorre infused an assortment of personal obsessions into a coming-of-age story like none other.

Starring Grace Van Patten, Soko, Havana Rose Liu and Juliette Lewis, the fantastical drama centers on Ana (Van Patten), a young woman experiencing only pain and darkness in the real world, who is transported to an otherworldly land. There, she joins an army of women in a war without end, seizing upon her inner strength and making fast friends, while ultimately realizing that she needs to get back home.

As Cinorre explained, while sitting down with her cast at Deadline’s virtual Sundance Studio, Mayday was inspired primarily by Greek plays and myths, which were the first forms of literature she was drawn to, given their abundance of strong female characters. “I didn’t really see characters like this in very many places, so I’ve always been coming from a mythological slant, when it comes to writing,” she said, “and I wanted to write girls and women in this vein.”

For the writer/director, one of the most intriguing Greek myths was always the myth of the Siren. “[These were] women who were half bird, half woman, who were on the rocks, luring men who were in their ships, going to war, to their death,” she explained. “I just thought that was such an incredibly beautiful, mysterious, strange image and concept, and I think that’s probably the biggest inspiration for this piece.”

From the perspective of the actors involved with Mayday, the first major draw of the project was Cinorre herself. “I just fell in love with Karen when we first spoke. She has a poetic way about her, and then also the script was so unusual,” Lewis said. “I’m so wanting to be involved in cinema where people are taking chances, doing the untried, and it’s not usual that people are doing that with the medium so much anymore.”

“I thought it was the most unique script I’ve ever read, and wanted to know so much more about it when I read it,” Van Patten added. “I really fell in love with the power of sisterhood and friendship in there, and how it can get you through anything during a hard time.”

Shooting the film’s fantasy sequences along the Croatian coastline, the actors had plenty of time, heading into production, to get to know one another, and to find their way into the singular world of Cinorre’s invention. “I feel like Karen really established that like day one, we were all hanging out and making sure that we had a round table, just bringing up our experience and sharing a lot of very vulnerable things, like our family background and our trauma, and what in our character reminds us of what we’ve been through, and what is the movie evoking for each and every one of us, in very different ways,” Soko said. “That was also such a sweet way to bond, and I feel like that’s very specific to shooting with so many women, establishing something very sweet and nurturing, and caring, and gentle and open, and really working together.”

“We all allowed for so much vulnerability, not only just about the sweet aspects of the script, but really the nitty-gritty, and why we were drawn to this on a deep, carnal, traumatic level,” Liu added. “I think [that] allowed us to bring a severe level of presence to the work we were doing, because it’s not just a walk-in-the-park kind of story.”

When people see Mayday, Cinorre hopes they will walk away with a sense of hope. “When I was writing it, I remember somewhere in the middle, I just started to cry and thought, ‘I want to dedicate this to all the girls that didn’t make it out of something very dark,’” the director recalled. “I know people like that—we all do—and I wanted to celebrate those women and girls.”

Also starring Mia Goth and Théodore Pellerin, Mayday premieres at Sundance today, at 12 PM PST. For more from our conversation with its director and stars, click on the video above.