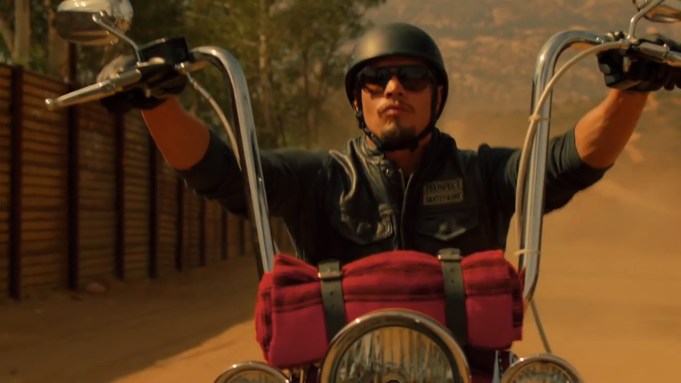 It’s now clear that it was a smart move on Kurt Sutter’s part to put some road between the end of Sons of Anarchy and the upcoming debut of FX’s very good spinoff Mayans M.C. on September 4.

While reaction to the now cancelled The Bastard Executioner was mixed to say the least, the step into 14th century Wales and away from telling the tales of California biker gangs seems to have sharpened the already pretty honed writing talents of The Shield producer.

Teaming up with Little Birds director Elgin James to unveil the very American saga of the Emilio Rivera led Latino organization, Sutter has taken a stab into the underbelly of not just biker criminal culture but the demographic and culture wars blazing across America right now, as I say in my video review above.

In this two-wheeled tale set a few years after the death of Jax Teller in the 2014 end of SOA, you’ll recognize Rivera reprising his Sons role of Mayans national president Marcus Alvarez, but for the most part, this redemption story of sorts goes down new routes with new faces. In a cast that includes a giant like Edward James Olmos as the father of just out of jail and conflicted Mayans prospect EZ, played by J.D. Pardo and his charter colleague and brother Angel, portrayed with acumen by Clayton Cardenas, there is a lot to see, take in and pay close attention too.

However, really make sure you don’t look away when Mayans full patch and American Crime vet and past Emmy nominee Richard Cabral and Law & Order: SVU alum Danny Pino as the bloodthirsty Cornell educated cartel heir are on screen. With such strong performances, Mayans is a place much more than most series in the era of Peak TV where, to paraphrase one of the characters, the real world comes crashing in. Here the impact is even greater with disputes on the US/Mexican border, strange political bedfellows, the washing of dirty money and guilty consciences as well as hogs, betrayal, ruthlessness and regret.

Check out my video review of Mayans M.C. above and, whether you were a fan of SOA or not, watch the show’s premiere on September 4 – it’ll get your motor running.

This review originally ran on August 16