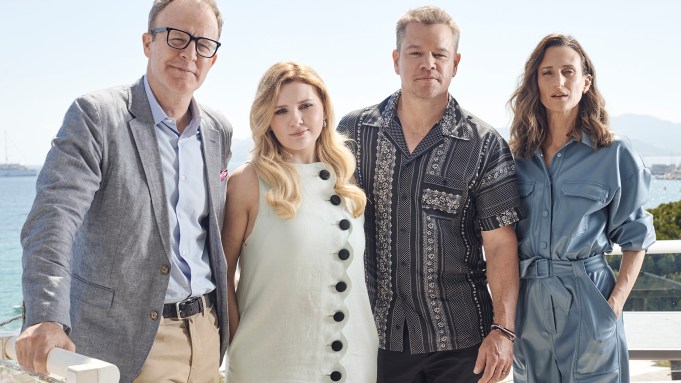 As Bill in Tom McCarthy’s Stillwater, Matt Damon is an Oklahoma roughneck fighting for his estranged daughter (Abigail Breslin)’s release from a Marseille prison. Along the way, he experiences a renaissance of sorts, as he connects with single mother Virginie (Camille Cottin), faces cultural differences, and gets another chance at family life.

Speaking at Deadline’s studio in Cannes, where the film is playing Out of Competition, Damon explained that he and McCarthy had spent time with real-life roughnecks—research Damon felt had been essential to his role.

“We felt like the access they gave us was incredible,” Damon said, “and it’s kind of the luckiest part of our job, the windows people give us in to their lives… they could not have been more gracious, taking us around, taking us to these oil rigs, showing us what they do.”

Damon also learned about the typical roughneck style of goatee, hat, sunglasses and jeans—the look he wears in the film. “It’s almost like a uniform,” he said. Plus, the physical power it takes to be a roughneck had to be there in the character, particularly as Bill’s daughter references his messy past.

“Tom really wanted the threat of violence to be right under the surface at all times,” Damon said. “Then you can kind of understand this past life that people keep talking about, that he is capable of doing that.”

Of the film’s Marseille setting, McCarthy said, “I liked the idea of it being on a coast, specifically on the Mediterranean… I just felt like Marseille provided all the elements, all the layers that I needed to tell the story. Because the story has a lot of dimension to it, and goes to a lot of different places and worlds, it’s essential to Bill’s journey and the story’s journey.”

For Breslin, getting into the headspace of Bill’s daughter Allison, who, in an Amanda Knox-like scenario, has been imprisoned for murdering her lover, meant talking to the formerly incarcerated. “I spoke to a couple of people who I will not name, who have been in prison,” she said.

When we meet Allison, she is clinging to the idea that she might be exonerated. “I think at this point she is fighting so hard there is almost a denial in her… this tiny glimmer of hope is the one thing she has to hold onto. That keeps her levelheaded but it’s a slightly delusional aspect of her.”

Cottin commented that the film’s confluence of cultures encourages a broadening of one’s viewpoint. As Virginie, she challenges Bill to question racism he has simply ignored in the past. In one particular scene, she draws a line and refuses to engage with a French man’s racist diatribe. “It seems to me that there’s so many Americas and so many faces of France, and we’re arguing about a French racist, much more racist than [Bill] is,” she said. “Obviously, there are different levels of everything… It’s interesting that changing your contexts helps widen your perspective.”