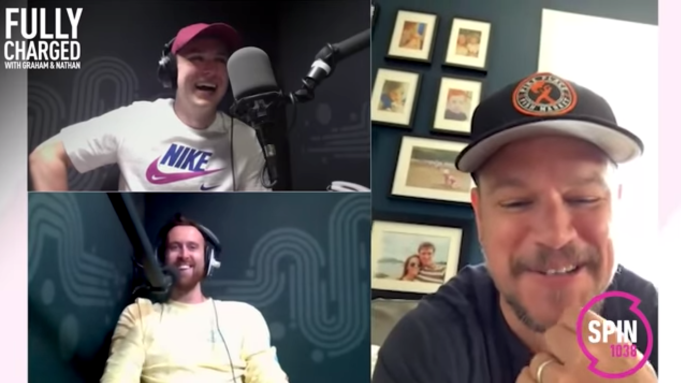 When Deadline revealed back in March that production in Ireland on Ridley Scott’s period epic The Last Duel was going on an indefinite hiatus due to coronavirus, the expectation was that the cast and crew would fly back to the States to wait out the pandemic.

Not Matt Damon, who decided to spend the lockdown on the Emerald Isle, staying in Dublin suburb Dalkey with his family. The star has been keeping a low profile in the last couple of months, but surprisingly emerged yesterday to chat to local radio show SPIN 1038 for his first interview since the crisis.

The presenters were, as you’d expect, thrilled to have Damon on as a guest, and even more so when he revealed that he had been turned onto the show by U2 frontman Bono and had been listening while driving around the locale.

For the actor, life in lockdown has been pretty pleasant.

“It’s incredible. This is one of the most beautiful places we’ve ever been,” said Damon, who also pointed out some of his famous neighbors. “When we came in, people were like, ‘Bono lives over there, Enya lives over there’… I’ve face-timed with Bono.”

“Obviously what’s going on in the world is horrible… but I’m with my whole family, I’ve got my kids. We have teachers with us because we were planning on missing school for eights weeks – we have what nobody else has which is actual live human beings teaching our kids. We feel guilty, we’ve got this incredible set up in this place which is absolutely gorgeous,” he added.

Damon also revealed that his eldest daughter, who is in college back in New York City, had COVID-19 but has since recovered.

The actor also talked about his role in Steven Soderbergh’s Contagion, which depicts a fictional pandemic. “Anyone who says you couldn’t predict this [coronavirus], just look at Contagion 10 years ago, we made a movie just by talking to experts and asking how it could look.”

The Last Duel has eight weeks of shooting left, and Damon confirmed that there’s no clear timeframe on when it might resume. “Whenever the world rights itself and we’re allowed to go back to work, we still have this movie to make… hopefully sooner rather than later, we really want to get on with it.”