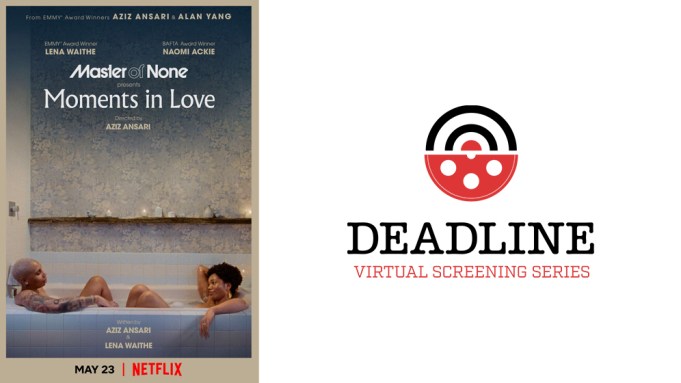 When Lena Waithe and Naomi Ackie signed on to star in Master of None Season 3, they each experienced a different kind of pressure, based on their past experiences.

The most daunting aspect of the shoot, for Waithe, was the fact that she was thrust fully into the spotlight for the first time. Prior to Season 3, titled Moments in Love, she had played a supporting role, also co-writing the Emmy-winning episode, “Thanksgiving.” This time around, though, her character Denise would be at the very center of the narrative in all five episodes, which she co-wrote.

“I think…it definitely felt like a little more pressure to step into…Aziz’s shoes and sort of be at the center,” Waithe admitted during a recent panel discussion, as part of Deadline’s Virtual Screening Series.

In contrast to Waithe, Ackie came in as a Master of None newcomer. And while the BAFTA winner was excited to work on the romantic drama with artists she admired, she was also aware that she’d be taking on an intense kind of “relationship study performance” that she’d never done before.

“I feel like the whole experience really stretched me,” she said, “to the point of being uncomfortable at points.”

At the same time, she added, “I don’t think that’s a bad thing. I feel like I really grew in doing this.”

Co-created by Aziz Ansari and Alan Yang, Master of None focused in its first two seasons on the romantic highs and lows experienced by Ansari’s actor character, Dev. Season 3, meanwhile, examines the marriage of Denise and her partner Alicia, watching as fertility issues start to wear away at their relationship.

Like Ackie, Waithe was put through the emotional ringer during the shoot. But at the same time, she said, “it’s probably some of my proudest work as an artist, because it is raw. You’re seeing me work through some stuff on screen.”

Ansari and Yang also appeared for Deadline’s panel discussion, breaking down the inspiration behind their decision to reinvent Master of None in its third season. Production designer Amy Williams, music supervisor Zach Cowie and editor Ben Yeates were present, as well, to detail their experience of working on the show.

Check out our entire conversation with the creators, stars and artisans of Master of None above.