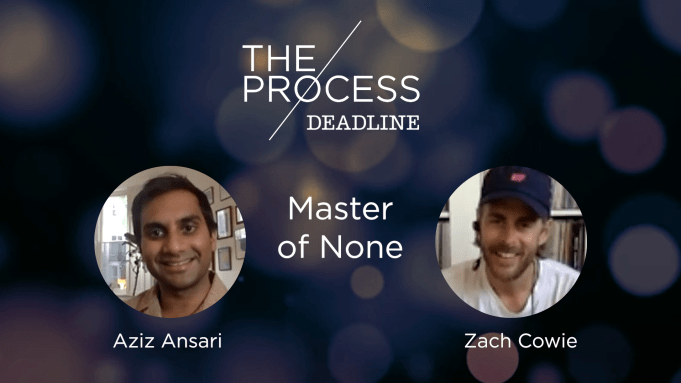 When Aziz Ansari decided to bring Master of None back for a third season, his goal was to completely reinvent the series, breaking new creative ground.

“I really wanted to get rid of all of the things that were…like safety nets or crutches,” he explains, “to see how we could make something interesting by stripping away everything people associate with us.”

Part of what this meant, for Ansari, was stepping back from his starring role, to focus on his contributions behind the scenes, as writer, director and EP.

In its first two seasons, the dramatic comedy he co-created with Alan Yang explored the romantic highs and lows experienced by his actor character Dev. But when the show returned for its third season this month, after four years off the year, it pivoted to focus on Dev’s close friend Denise (Lena Waithe), and the evolution in her relationship with partner, Alicia (Naomi Ackie).

Another major change in Season 3 (titled Moments in Love) had to do with the way in which Ansari and his music supervisor, Zach Cowie, would use music to help tell their story. In retrospect, Ansari felt that in Seasons 1 and 2, he’d relied too heavily on “cool music” as a storytelling tool. This time around, then, he’d for the most part strip music away.

In the second episode of Deadline’s video series, The Process, Ansari and Cowie break down the stylistic shift of Season 3 in great detail, offering at the same time abundant insight into the nature of their collaboration.

As Ansari explains, a major cinematic influence behind Moments in Love was the “so-called ‘slow cinema’” of filmmakers like Yasujirō Ozu, who use music in a much different way than he ever had in the past. Master of None’s co-creator admits that he was “a little bit nervous” when he approached his longtime collaborator Cowie about the season “because in that meeting, I basically said, ‘Hey, I don’t want to use any music. The only music I want to be in the show is music that’s diegetic, or music the characters are listening to.’”

While it felt strange to ask his music supervisor for less music, Ansari was surprised to find that his pitch instantly resonated with Cowie.

“I understand the fear in that [request],” Cowie says. “But I instantly was like, ‘I don’t want to use music either!’”

From the music supervisor’s perspective, the show only grew in emotional power by relying on music less. Ultimately, stripping music back allowed him to explore “obsessions” with silence and time that had been brewing for years, only becoming more fascinating and relevant amidst the Covid-19 pandemic. “This is something I’ve been working towards for a long time. I think a number of my heroes have figured this out—like, the more you do something, the more you learn how to say more with less,” Cowie explains. “That’s a big inspiration to me, and I think that we learned in this process, kind of in real time, how much music is in silence.”

On this year’s soundtrack, Jessye Norman proved to be far and away the most influential presence. Ansari and Cowie note that in a strange way, the late opera singer came to serve a as a kind of “narrator” for the series by way of her music.

“When you started playing me this, I was immediately just so overwhelmed by her voice,” says Ansari, “and I just loved that it was so in sync with what we were doing.”

In their work together on Master of None, Ansari and Cowie have hit on a kind of collaboration that is not often seen in television, between writer-director and music supervisor. In comparison to many music supervisors—who don’t even get to see dailies from the shows they’re working on—Cowie has been empowered to shape the final product to a much greater extent. The music supervisor’s feedback is valued, to the extent that he has typically seen scripts for the show before almost anyone else.

The pair had only met once or twice in passing, prior to working together on the Netflix series, but Cowie says he felt like he was “on some wavelength” with Ansari right from the get-go.

What the music supervisor initially responded to, in Master of None, was “a fearlessness” that he feels the show continues to manifest. “I think if you track the three seasons, there’s something about us all kind of sharing the excitement of walking those tightropes and just doing s—t differently,” says Cowie, “and that’s what spoke to me.”

In their wide-ranging chat on The Process, Ansari and Cowie also spill details on their first meeting at a wedding, playlists Cowie created for the Season 3 shoot, and why the job of music supervisor isn’t one Cowie recommends to others. They also discuss bringing KUSC DJ Jim Svedja into Season 3, music supervisor Kerri Drootin’s contributions to Master of None, inspiration found in the films of Stanley Kubrick, and much more.