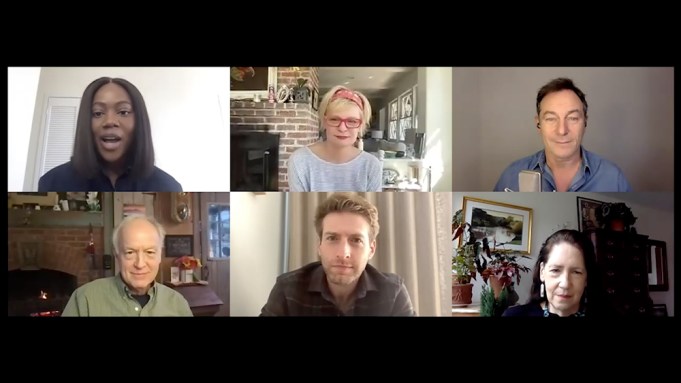 Mass, the screenwriting and directing debut from Fran Kranz, captures an emotionally charged meeting between two couples, parents of both the victim and the perpetrator of a tragic shooting that took place years ago.

During his time at Deadline’s virtual Sundance studio, Kranz shared how the Parkland school shooting and becoming a father played a big role in the making of this film.

“I remember the day of the Parkland shooting. It was February 14th, 2018. I was overwhelmed with emotion, listening to a parent that day. I also thought it was kind of strange to have that reaction because I really never responded that way to these events before. The obvious reason was that I was a father at that point,” said the Kranz, whose daughter was 16 months old at the time.

“That set a course for the next two, three years now where I just kind of became a bit obsessive about the subject, to be honest. “The catalyst was really just simply feeling incredible compassion and empathy for people directly involved in a way that I hadn’t felt before.”

Kranz was joined by the film stars Martha Plimpton, Jason Isaacs, Reed Birney, Ann Dowd, who play the parents that throughout the course of the film are situated in a small room as they parse through their emotions in an effort to reconcile with the past.

For Kranz, having the characters come together in that type of setting for an unfathomable and deeply painful conversation was a way to showcase “the power of human connection.”

“I wanted to remind people of that,” he continued. “I wanted to sort of restore some faith in this idea that no, we can do this. We can sit together and we can work through things and we can even without agreeing with the other person and be still essentially at odds, in terms of perspective, we can still reconcile.”

“The challenge of the future is to reconcile these things without agreeing and I think that there’s a possibility to that in this sort of spiritual realm, which is kind of what the movie is really about.”