Continue to Deadline SKIP AD
You will be redirected back to your article in seconds
Skip to main content
January 2, 2019 9:55am
1Comments 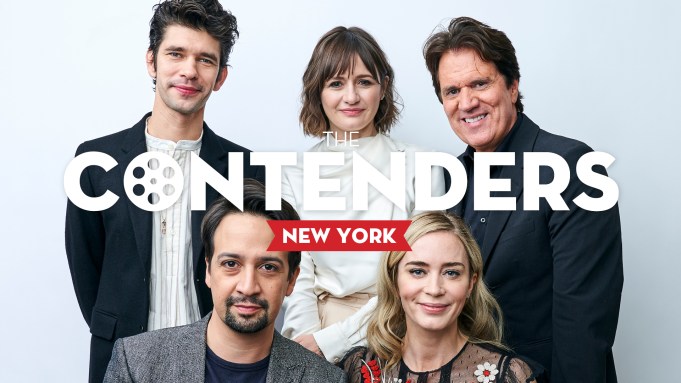 If you want to start your day off with a bang, just invite Mary Poppins. That is what happened when director Rob Marshall and the cast of Disney’s smash hit Mary Poppins Returns, the sequel to Disney’s beloved classic 1964 Oscar-winning musical, took the stage at the DGA Theater in New York City last month as the kickoff panel for Deadline’s first-ever The Contenders New York.

Marshall, along with his stars Emily Blunt, Lin-Manuel Miranda, Ben Whishaw and Emily Mortimer, described to the packed audience of AMPAS and key guild members the absolutely daunting task of filling the shoes of the original film, which has gone five decades without ever having a sequel. Marshall describes the new movie as something meant to be protective of our memories of the first, but now offering truly a message of hope in darker times.

Blunt talks about her “sassy” take on doing the Poppins character, going back more to the books than trying the impossible task of emulating Julie Andrews. Miranda talks about the fact that nine weeks of rehearsals turned the cast into a company like any Broadway show including Hamilton — and that was his way into playing his first major film role.

Whishaw and Mortimer, meanwhile, discuss taking on the grown-up versions of two of the most famous movie kids ever: Michael and Jane Banks. Mortimer calls the new film a “love letter” to the first one, and notes that “we all need a dose of Mary Poppins desperately right now.”

To watch my lively conversation with this practically perfect in every way panel, watch the video above.