Continue to Deadline SKIP AD
You will be redirected back to your article in seconds
Skip to main content
June 13, 2019 3:46pm 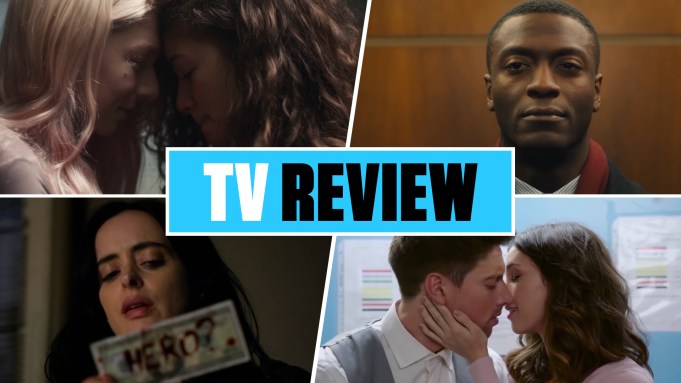 There was a record breaking Stanley Cup game on last night, Instagram is down right now and a potentially historic NBA Finals match-up comes to the small screen tonight, but social media and sports aren’t the only arenas where the action is this week.

The third and final season of Marvel’s Jessica Jones launches on Netflix tomorrow and the already controversy attracting teen drama Euphoria hits HBO on June 16. That same night, the Aldis Hodge and Kevin Bacon-led City On A Hill premieres on Showtime and one day later Grand Hotel opens its doors on ABC.

Take a look at my video review above to see which one is be show you have to watch this week.

The final offspring of the now dissolved Marvel and Netflix nuptials of 2013, the Krysten Ritter-led and Melissa Rosenberg showrun Jessica Jones tackles fame, family, rivalry, loss and redemption in its third and last season. The 13-episode tale comes to its superpowered and heartfelt conclusion with the not insignificant skills of Rachael Taylor and Carrie-Anne Moss as well as new additions such as Broadway’s Andrew Jackson Benjamin Walker.

Executive produced by Tom Fontana, Jennifer Todd, Ben Affleck, Matt Damon and Barry Levinson and created by Chuck MacLean, City On A Hill goes back to the Boston of 1992 as ambitious Assistant D.A., played by Underground alum Hodges, and degenerate New Frontier inspired FBI agent, portrayed by the I Love Dick star Bacon, team up to clean up the metropolis’ corruption.

In addition, the 10-part Showtime series has a great Bill Clinton zinger that everyone should appropriate for the 2020 election and an excellent supporting cast including what should be award-winning turns from Jonathan Tucker and Jill Hennessy.

Executive produced by Eva Longoria and based on a Spanish series, ABC’s Grand Hotel is multicultural Miami set and sun drenched for the summer season. Demian Bichir sits a top the shenanigans as the patriarch of a luxury lodging owning family where wealth, sex, power and intrigue warm the soap twists and turns of an upstairs/downstairs saga.

In the lodging mode, HBO’s highly explicit Euphoria finds Zendaya hunkering down in a teen drama that’s certainly a long long way from her Disney roots and Spider-Man’s Michelle “MJ” Jones. Based on an Israeli series, the Sam Levinson developed show has Drake and Future the Prince as EPs and truly leaves no rock of American teen distress or decadence overturned.

With all that, to overturn and discover which one is the show you have to watch just click on the video review above.