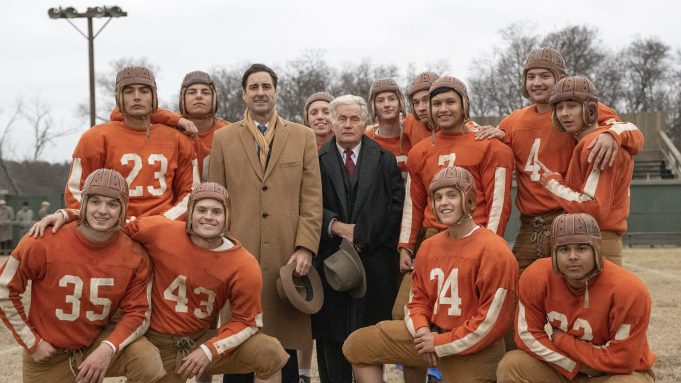 During the Texas shoot for 12 Mighty Orphans, Martin Sheen was reunited onscreen for the first time with his Apocalypse Now co-star Robert Duvall.

Since working together on that 1979 classic, Sheen had stayed in touch with the Oscar winner to some extent. But they hadn’t spoken, prior to their time together on the Sony Pictures Classics drama, for a number of years.

While Duvall’s appearance in the film is just a cameo, his appearance on set certainly made an impression on Sheen, despite the fact that he is a screen icon in his own right. “I had butterflies, trying to do the scene with him, because I still admired him so,” the Emmy winner told Deadline recently. “I mean, he’s one of the great actors of my generation … so I was a big fan, besides being a fellow actor.”

Sheen joked that his scene with Duvall in his latest Tribeca-premiering film, which he also exec produced, was maybe its “most ineffective,” purely because he was so “intimidated.” Still, he noted that Duvall was great. “He’s one of my heroes, and I hadn’t had a chance to work with him since Apocalypse,” said the actor, “so I was happy that he made the time for us.”

Co-written, directed and produced by Ty Roberts, 12 Mighty Orphans is based on the true story told in Jim Dent’s book of the same name. It centers on Rusty Russell (Luke Wilson), a devoted high school football coach who is haunted by his mysterious past, and country physician Doc Hall (Sheen), who together lead a scrawny team of orphans to the state championship during the Great Depression, inspiring a broken nation along the way.

With his latest film, Roberts looked to evade the “standard sort of tropes” of the sports film, offering up one that went much deeper in its examination of compelling real-life figures, their close-knit community and a fascinating passage of American history. “I felt like if we could somehow tie the drama behind Rusty and Doc and all the orphans’ lives … into our movie, we would have something super unique,” he said. “And there was no lack of content, that’s for sure.”

For Wilson, there was a great deal of responsibility in taking on the project, and the character of Rusty, knowing what he meant — and still means — to people in Texas. “I found myself just really wanting to honor the spirit of Rusty because he did seem like such a quiet, dignified person,” the actor said. “So I really wanted to try and capture that.”

Particularly given that he hasn’t played many real-life characters, Wilson threw himself into research and intensive prep for the film, seizing on the chance to meet with Rusty’s grandson, Russ Morton, as part of that. “I spent a lot of time just eating lunch with Russ,” he shared. “He’s maybe in his early 60s, so to get his impressions of his grandfather was just great.”

The Deadline Studio is presented by Verimatrix. 12 Mighty Orphans premieres at the Tribeca Film Festival today at 8 p.m. EST. For more from our conversation with the film’s directors and stars, click on the video above.