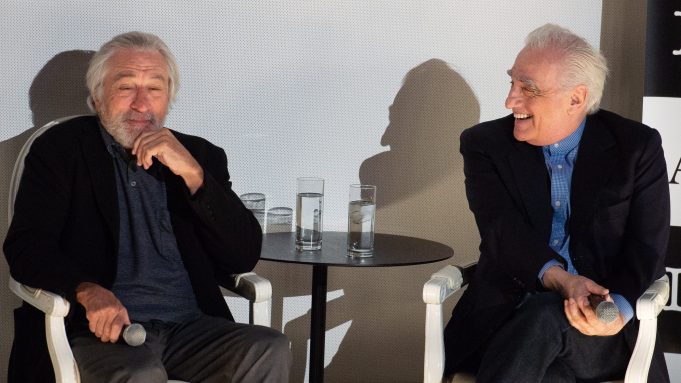 One surprising thing about The Irishman is director Martin Scorsese’s unusual push to use CGI to transform his cast of illustrious actors –  gentlemen of a certain age – into younger-looking versions of themselves, rejecting calls from Robert De Niro, Al Pacino and Joe Pesci to take an easier path and just add some younger actors to the cast.

“They said, ‘Get younger actors.’ I said, ‘No. The whole point is hanging out … and working together,’” Scorsese said Tuesday night during a Q&A with De Niro, moderated by Kathryn Bigelow, following an Awardsline screening of the Netflix movie at Manhattan’s Paris Theater.

His star cast knows “what it was like when Kennedy was shot,” the filmmaker explained. These stellar actors came of age during the arc reflected in this haunting mobster film that opens in 1950s New York and the authenticity is evident in the performances. So for chunks of the movie the actors, jowls reduced, eyes brightened, look 40 years younger than they are.

Luckily, Scorsese said, “In most of the scenes they don’t have to move fast.”

De Niro begged to differ. He worked hard but not always successfully with the production’s movement coach, who flagged behavior that wasn’t age appropriate for his younger self.

The CGI was technically complex and very expensive and Scorsese is exceedingly grateful to Netflix for footing the bill and generally “getting it.”

The idea sprouted when De Niro came across the 2004 book I Heard You Paint Houses by Charles Brandt. He took it to Scorsese. The men have known each other since 1971 and made nine films together. They were intrigued by the life trajectory of gangster Frank Sheeran, played by De Niro, believable, often likable, from early career to lonely old age and a complicated repentance.

The event – maybe the only one – that really gnaws at Sheeran’s conscience as he sits in his nursing home is murdering the unsuspecting powerful teamster boss Jimmy Hoffa. Except that didn’t happen. The fate of the union leader who disappeared in 1972 remains a mystery and the film’s historical license created a bit of controversy.

“I was very cognizant of getting involved where you are dealing with historic events, like the Kennedy thing, and there have been a  number of films made on Hoffa. So I needed to find the key to it and the key was [Sheeran’s] soul, the rest is a backdrop,” Scorsese said.

“It didn’t matter if it was true or if it was a story that was being told. It would be great to find out what actually happened but I don’t think anybody really knows,” said De Niro.

“There was something about his character and the aftermath of his life and how he described himself. There is something universal. It doesn’t really matter if all the details are real,” Scorsese said. “What matters is exploring what it means to be a human being that can live a life … as an executioner in a street war, and how that reflects on our society and all societies in the world, and human nature.”