Continue to Deadline SKIP AD
You will be redirected back to your article in seconds
Skip to main content
November 5, 2019 6:43pm
6Comments 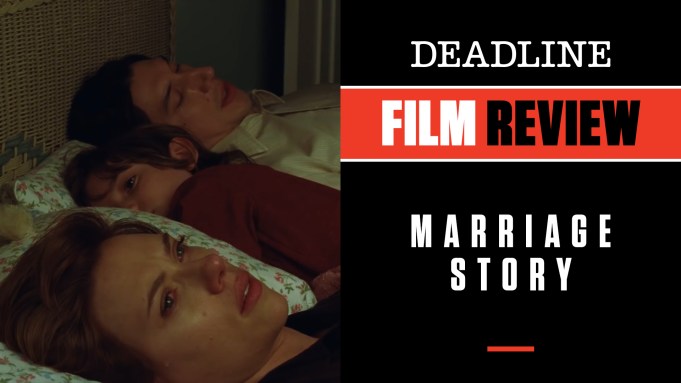 Writer-director Noah Baumbach has mined his own life for some sort of inspiration in many past movies including his college days in Kicking and Screaming, his parents’ divorce in The Squid and the Whale and turning 40 in While We’re Young. But now I have to use the “M-word” to describe his latest, and that would be, simply, masterpiece. But don’t go into it with all those lofty expectations because this is a movie that will sneak up on you, one you can relate to no matter what your marital status.

It’s heartbreaking, funny, touching, exceedingly smart, entertaining, enlightening and complex look at what can happen with those you choose to love. Marriage Story will grab you by the heart like no other movie this year.

Adam Driver is Charlie, a New York theater director, and Scarlett Johansson is Nicole, an actress. They have an 8-year-old kid (Azhy Robertson) and are good parents. As the montage that opens the Netflix film shows, the couple has a deep understanding of what they love most about each other. Nicole was a child actress and born to the West Coast. Charlie is right out of the East Coast and wants to go back. This becomes almost as much about the lure of those two places as it is a stunning love story that happens to be about a divorce. Drifting apart, career goals and life choices taking their toll on their relationship.

This is a movie alternately funny, sad, wise, angry, warm and real that explores the pain of breaking up but the need to keep the family together. It is full of heartbreak, but you also laugh out loud, especially as a trio of lawyers gets involved in the proceedings and take things to uncomfortable places. It is a series of scenes from a marriage that comes at us with the force of the things of life. Just as you might have a sense of recognition as Charlie and Nicole narrate the list of things they like about each other, a devastating scene revolving around an intense argument on the things they don’t like proves it gets a little complicated. There are no easy answers here as these two continue to discover themselves, and each other, in ways married and unmarried.

Baumbach wrote his script with the experience of his own divorce (from Jennifer Jason Leigh) and much research with couples in marriages of various status. It is a knowing piece of writing that has no villains, just human beings trying to figure it all out. With Driver and Johansson delivering the two best performances of their careers, we are in good hands. The supporting cast could not be better, including the three divorce lawyers you won’t soon forget. Laura Dern is sensational as Nicole’s aggressive lawyer, hilariously at times teaching her the importance of winning. Alan Alda is the too-nice Bert Spitz, who Charlie hopes could get the job done in a good way but soon discovers he can’t. So Ray Liotta’s bulldog of a lawyer, Jay, comes into the picture and goes for the jugular. They all are great, as is the rest of a cast that includes such stalwarts as Julie Hagerty and Merritt Wever as lesser-known performers like Martha Kelly, as the “evaluator” checking up on Charlie and his son, who nails her small role to perfection. It is a terrific ensemble.

Baumbach takes his story in surprising places, crossing movie genres from comedy to drama, Hitchcock to musicals — a sequence featuring a couple of songs from the Broadway show Company is a standout, with Driver giving new meaning to its signature song, “Being Alive” — and many more influences cinematically. This is a film that is just best to discover, a deeply personal one that may hit different people in different ways. At a recent Q&A, Dern called this film “a gift.” It is.

Check out my video review by clicking the link above. Producers are David Heyman and Baumbach. It starts a limited monthlong theatrical run on Wednesday and begins streaming on Netflix in early December.

Do you plan to see Marriage Story? Let us know what you think.