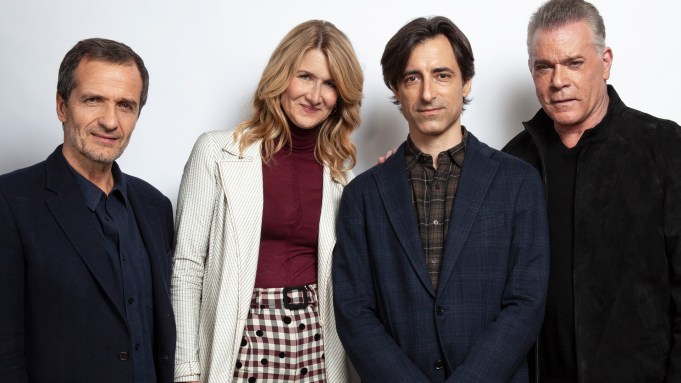 Ray Liotta, who co-stars as a bulldog divorce lawyer in Noah Baumbach’s Marriage Story, praised the director for creating a calm set, joking that he’s previously worked with some “maniac” directors. “Noah is great to work with and he’s very calm because I’ve worked with some maniacs,” Liotta said recently at Deadline’s The Contenders London, where he was speaking on a panel alongside co-star Laura Dern, Baumbach and producer David Heyman.

The Goodfellas star said that Dern’s character, Nora Fanshaw, a rival lawyer, didn’t like his character, Jay, which he joked may have been personal, “but I’m working on her.” He had Dern and the crowd laughing as he explained why he wanted to work with Baumbach in the first place.

“It’s always about the script — this was so well written that you just submit to it,” he said. “I’ve got a saying, ‘the people who feel it deepest, wins,’ and everybody who did this really invested themselves. You just submit to it and have fun.”

Dern agreed. “Noah’s research and inspiration and therefore mine in this very specific job in life was about really becoming the one person who is truly listening to your story for the first time,” she said. “You may not realize that as best friend and therapist, they’re going to use every piece of information and even the intimacy of the moment to win, which is why you’ve hired them, but you also don’t realize winning may mean your family’s best interest isn’t in consideration, nor your pocketbook.”

The drama stars Scarlett Johansson and Adam Driver at the end of their relationship as husband and wife, and at the beginning of something else.

Baumbach said that he had been wanting to make a love story for a while. “I didn’t know how to find my way into it that felt electric or new to me so weirdly it was in telling a story of divorce, which I explored from the kids’ perspective in The Squid and The Whale, this one is more from the adult perspective,” he said. “I found it was an opportunity to explore marriage and love while chronicling its undoing.”

Heyman said that producing with Baumbach was “an absolute pleasure because he’s very direct and very clear about what he wants, there’s no politics. He’s very demanding, because he has very specific sense of what he wants and he’s a great collaborator, he brings out the best in the people he works with.”

He added, “This is my first dance and I really hope I get to do it again.”